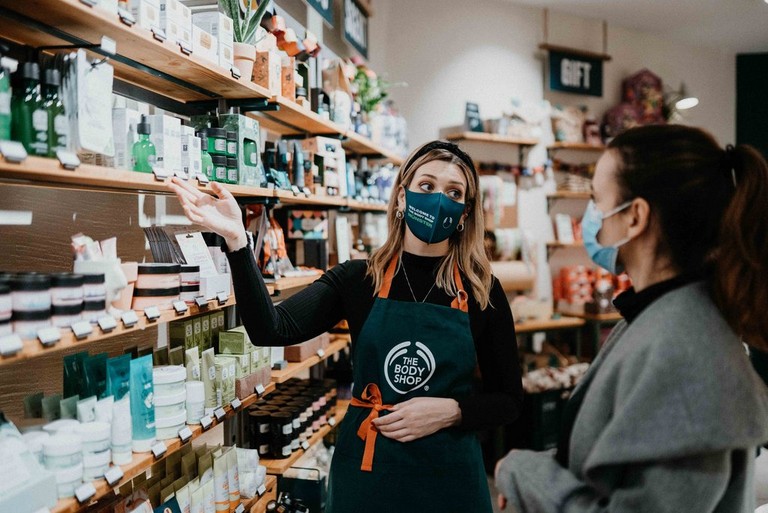 Image via The Body Shop

For months, retailers have been scrambling to attract talent. Some businesses are now giving the entire hiring process a second look.

One company is approaching hiring by doing something very simple: opening up the application process to more people. Cosmetics retailer The Body Shop decided to try out a new first-come, first-service open hiring process via a September 2019 pilot at its North Carolina distribution center. At the time, the retailer was able to hire 208 seasonal employees. By the end of 2020, the company rolled out a second pilot across its U.S. and Canadian stores to bring on entry-level seasonal hires. This fall, the company officially adopted the program for its entire entry-level retail and distribution center hiring going forward.

This holiday season, retailers have struggled to find enough seasonal staff because of labor shortages. Retailers like Walmart, Target and Costco have responded by increasing their hourly minimum wage in 2021, and in other cases, issuing short-term bonuses. But retailers like The Body Shop have also found that they can get more applicants by simplifying the hiring process.

As part of the new hiring process, The Body Shop stopped asking for background checks, drug screenings and requiring previous experience. Beginning with the pilot program, the company stopped doing formal interviews, or asking for résumés or educational requirements. This gave many people often shunned from the process — such as homeless or formerly incarcerated people — a better chance at landing a job, said Jennifer Wale, people director at The Body Shop. “We only ask candidates three questions: ‘Are you legal to work? Can you lift 50 pounds? And can you stand for eight hours?”

Wale said the idea to overhaul the hiring process began in 2018, as The Body Shop was preparing to become a B Corporation. “The barriers that we ourselves had put in place stopped us from finding the right workers for our stores and distribution centers,” Wale said. The Body Shop employs over 2,500 store associates and warehouse workers across 86 North American stores and its distribution centers.

“The bigger talent pool made us realize we weren’t hiring groups like non-English speaking immigrants who have the skills, for say, pick and pack,” said Wale. Since first implementing open hiring at its Wake Forest, North Carolina distribution center in 2019, The Body Shop said it has hired 733 seasonal employees. Of those seasonal hires, 80 have been converted to permanent employees — including 15 in distribution centers and 65 in stores.

The open hiring method, which was being tested prior to the coronavirus, also helped The Body Shop continue hiring during the pandemic, Wale said. “We got a lot of displaced workers who came from hard-hit industries, like restaurants and hospitality,” she said.

Wale said the program has also been aided by employee word-of-mouth, as well as promotion by the company’s staffing agency, “so even when someone leaves we have interested applicants in the pipeline,” said Wale.

“When evaluating candidates, you should only look at relevant qualifications for the job to avoid limiting the candidate pool,” Hudy explained. Doing so, he said, can help undo systemic practices that companies have latched onto over the last few decades — like educational requirements and background checks.

Furthermore, the ongoing worker shortage is highlighting “the broken practices that have been in place,” Hudy said. For instance, résumés and background checks are often a waste of employers’ time and resources. They also don’t always reflect an applicant’s potential customer service or fulfillment skills, Hudy said. With retail workers quitting in record numbers — 600,000 employees left the sector during June of this year — opening up the candidate pool has become more important than ever.

As retailers rush to hire seasonal workers for the holiday rush, Wale said The Body Shop is adequately staffed. In the U.S. stores, for example, the company was able to hire enough associates to cover its Black Friday and Cyber Monday rush, Wale said.