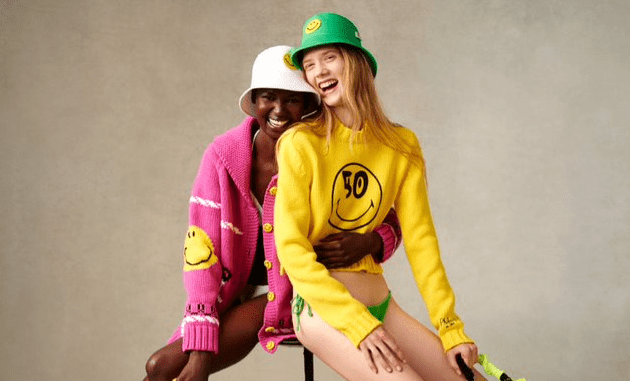 For half a century, a European business called The Smiley Company has quietly been the go-to partner for any retail company looking to slap a black-and-yellow smiley face on its apparel or products.

Licensing company Smiley recently celebrated its 50th anniversary and is releasing co-branded products with 50-plus companies to celebrate.

Today, The Smiley Company — which has trademarks on the term Smiley and the black-and-yellow version of the emoticon — has around 68 million licensed products that drive $573 million in annual sales across band partners. Unlike many licensing companies, Smiley isn’t connected to a well-known media property or characters like Disney’s Baby Yoda or Mickey Mouse, but, instead, a symbol that many may not even know is trademarked.

To build its business and name recognition, Smiley proactively pitches companies. The company puts out more than 25 style guides a season, offering brands pre-existing ideas for product and marketing support after production. This has led the company to around 400 licensee deals worldwide with companies ranging from luxury house Raf Simmons to apparel retailer H&M.

Smiley CEO Nicolas Loufrani said that, in general, “nobody cares about a brand anniversary,” beyond the brand itself. So to celebrate its anniversary, the company wanted to drum up buzz by launching limited edition items, with a focus on department stores to recruit luxury brands. It promoted these items in pop-up store-in-stores in 10 Nordstrom locations in the U.S. and online. Smiley also partnered with other department stores around the globe.

For each Smiley product, explained Loufrani, the company wanted to tap into brands known for that category — participating brands include pajama brand Sleepy Jones and denim company Lee.

“For the 50th anniversary, my vision was to have brands that were iconic for each product,” said Loufrani. “The public is going to feel that it’s something has been done with passion, and we want brands who are going to really go the extra mile to develop unique products.”

How the smiley face made its way into retail

Jeremy Peter Green Eche, a trademark attorney and broker at trademark marketplace Communer and firm JPG Legal, explained that Smiley’s ownership of what now may feel like a ubiquitous symbol is the result of a filing in the 1970s.

“Just because it’s popular now and seems so widespread, doesn’t mean that it wasn’t originally a distinctive brand,” said Eche. “[However] it’s a weird case because obviously it’s even used in people’s cell phone keyboards. It’s so ubiquitous it’s hard to even wrap my head around as a trademark attorney… I think this is just one of those weird, historical quirks of trademark law.”

Franklin Loufrani — father to now-CEO Nicolas Loufrani — patented the word and specifically, the yellow-and-black design in France in 1971, while he was working as a journalist. As the symbol grew in popularity, the company then inked brand licensing deals with candy brand Mars and denim company Levi’s as the smiley face symbol grew in popularity. When son Nicolas Loufrani joined the company in 1996, he filed for trademarks for the name in hundreds of other countries and formed the official The Smiley Company.

In the decades since, the increased use of emojis has made the smiley emoticon a staple of everyday communications. That’s led to a few clashes between Smiley and other brands and retailers, some of whom have (unwittingly) run afoul of the company’s trademark.

For example, Walmart and Smiley privately closed a legal dispute 2011 after Walmart began reincorporating a smiley face into its marketing. Emmanuel Orenga, a lawyer for the Smiley Company told CNN in 2016 that “terms are confidential but Walmart is authorized to use their logo for these new advertising campaigns.”

When asked how Smiley goes about enforcing its trademark, Loufrani said in a follow-up email to Modern Retail that, “like most licensing companies, our IP is a fundamental element of our business, and as such we work diligently to protect and enforce it around the globe. It is an essential part of our strategy and success as a global licensee.”

On the “infringement” page of Smiley’s website, the company said it undertook 138 legal actions in 2015, “which resulted in the destruction of hundreds of thousands of products.”

Turning an emoticon into a business

Eche said that while many clients come to him hoping to create value via a trademarked logo or name, Smiley is one of the few companies that he’s seen drive value without an attached media property.

“I don’t see a lot of these licensing companies that exist basically for one image and one word,” said Eche.

In order to stand out from other licensing companies, Loufrani said that Smiley focuses a lot on “building out our client service.”

“A lot of licensors will give you a style guide with images from a cartoon and then you do whatever you want with it and you pay the check at the end of the quarter,” he added.

The Smiley Company is generally more involved in the process. The team has multiple divisions focused on product development in different categories like fashion, food or home and creates and refreshes style guides seasonally.

The company also invests in marketing for its brand partners. For the 50th anniversary, for example, Smiley and Nordstrom operated in-store selfie booths to promote the collection.

Loufrani added that while many licensors operate off of media cadences — signing a flurry of deals around a new movie or show  — Smiley tries to keeps its deals “consistent and sustainable all the time.”

This requires collaboration with brands. Smiley has guidelines within this process. For example, the brand keeps its Smiley Original trademark away from discount retailers and avoids controversial product categories like cigarettes.

Going forward, Smiley is looking to come up with new campaigns that capitalize on popular trends to continue to capitalize on that popularity. The company is already working on its next campaign and product launch, “Future Positive,” with a focus on sustainable smiley-adorned goods.

The company is also currently working with European grocery chains like Aldi and Lidl on amping up their private labels with Smiley branding.

“Private labels are going to grow a lot with the inflation that we’re seeing,” said Loufrani. “Instead of having just your supermarket brand name or something boring, we’re going to develop some exciting product — especially for the children and for the teenagers — with exciting packaging around the Smiley name.”