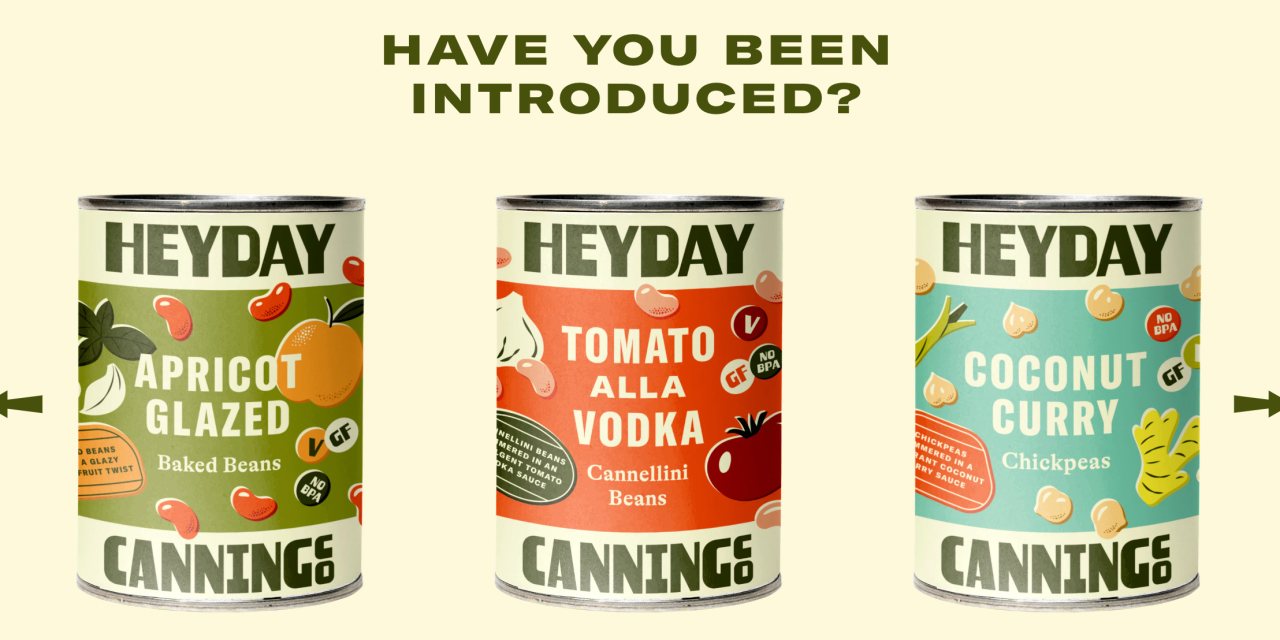 Like many shoppers at the beginning of the pandemic, Kat Kavner and Jaime Tulley were looking for easy, protein-packed meals that wouldn’t require multiple trips to the supermarket. They found the solution in canned beans, and were so excited by the product that they jumped into the kitchen to experiment with new flavors and ingredient combinations.

Fast forward two years later, and Kavner and Tulley are officially bringing their company Heyday Canning Co. to market. The brand has six different flavors — Tomato Alla Vodka, Coconut Curry, Harissa Lemon, Enchilada, Kimchi Sesame and Apricot Glazed — which, as of a couple of weeks ago, are available at all Sprouts Farmers Market’s locations across the U.S. In January, Heyday Canning Co. will start selling directly to consumers through its website.

Canned food “had remained the same for decades and decades and decades,” Kavner told Modern Retail. “Meanwhile, every other category in CPG had been kind of reinvented by a wave of startup brands that have delivered new products that are in better touch with what modern consumers want. It struck us as really interesting that there was this huge category that felt essentially untouched and felt like one of the final frontiers for food innovation.”

Heyday Canning Co. is one of several new brands popping up to refresh the shelf-stable category, at a time in which shoppers are more used to cooking at home, are continuing to build out their home kitchens and are looking for longer-lasting food options that won’t break the bank. Inflation has affected the cost of food for months, with prices in October 2022 10.1% higher than they were in October 2021, according to the U.S. Department of Agriculture. Unlike other products, pantry staples have long expiration dates and don’t need to be refrigerated. Canned goods have historically proven popular during recessions; unit sales of canning and freezing supplies were up 11.5% at the beginning of 2009, according to Nielsen Co. data.

“If consumers are aware of and concerned about price increases, they will look to alternative options,” Greg Carlucci, senior director analyst at Gartner, told Modern Retail. “For some, that means more cost-effective routes, which for some may be canned goods if they provide a quality or price that is better suited for their budget.”

Heyday Canning Co. sells its cans for $3.99 at Sprouts, although it is still settling on a price for its website. The company’s first focus has been physical retail, Kavner said, because “the economics of shipping canned goods direct to consumer are not particularly attractive. It’s just so expensive to ship heavy items like that.”

“We felt like this made more sense, really, in a brick-and-mortar retail environment,” she said, remarking that Heyday Canning Co. still wanted to explore DTC to “have that direct line of communication with customers and be able to distribute anywhere.”

Millstein and her co-founder Caroline Goldfarb created the company in 2020 and brought their products to around 50 specialty retailers in 2021. They expanded the business rapidly in 2022 and Fishwife is now in 600 stores nationwide. Recently, Fishwife came to the grocery stores Central Markets and New Seasons Market.

Like the founders of Heyday Canning Co., Fishwife’s creators were inspired to create their company during the pandemic. Millstein and Goldfarb, who were roommates at the time, found themselves eating plenty of tinned fish and wanted to explore the industry themselves. They also found that “the cultural tides had just really turned over the past five to 10 years” for tinned fish, Millstein told Modern Retail, but for those excited about tinned fish, “there was no brand that answered to the experience that the demographic was looking to have with canned seafood.”

Today, Fishwife works with a variety of canneries to sell several seafood products, including Smoked Atlantic Salmon, Wild-Caught Smoked Albacore Tuna and Smoked Rainbow Trout. Its Smoked Salmon Trio, together with Chinese sauce company Fly By Jing, was initially a limited-edition product but was so popular that Fishwife decided to make it part of its regular lineup. It retails for $39.00 online, for a three pack. Fishwife plans to launch five to seven new products next year, Millstein said.

Entrepreneurs with experience in other sectors are also increasingly entering the pantry staples space. This past summer, for instance, Aaron Luo and Carmen Chen Wu — cofounders of the luxury bag brand Caraa — launched their charcuterie brand Mercado Famous. Mercado Famous sells a variety of meat products, including chorizo, jamón and an entire cured pork leg.

“The mission behind Mercado was to bring not only the best we can find in Spain when it comes to charcuterie, but change the narrative around charcuterie a little bit,” Luo said on the Modern Retail Podcast earlier this year. “We just felt that there’s a newer and younger audience that’s somewhat neglected.”

DTC grocery brands as a whole gained tremendous traction at the onset of the pandemic, as people experimented with building out their home kitchens. Fly By Jing saw “a surge across the board in sales,” founder and CEO Jing Gao told Modern Retail in April 2020, while online natural foods platform Bubble saw 10x growth over two weeks at the end of March and the beginning of April. Even with people going back to restaurants, home cooking remains popular, with 71% of consumers saying they’ll continue cooking at home after the pandemic, according to a 2021 survey by the consumer market research firm Hunter. Today, DTC grocery brands are continuing to innovate in the space; many, like olive oil startup Brightland, have continued to expand their offerings, while others have invested heavily in frozen foods.

It’s still early, when it comes to competitors jumping into the canned goods space, Carlucci told Modern Retail. But, as far as the products go, “I think that they’ll continue to play an important role as they have for many years.”

“The expiration dates, the longevity on shelf is definitely an advantage for consumers that may be more conscious of making sure they’re maximizing their shopping trips and their grocery carts. So I do think that from an opportunity standpoint, it could be a way for goods and companies to introduce or optimize in that space.”