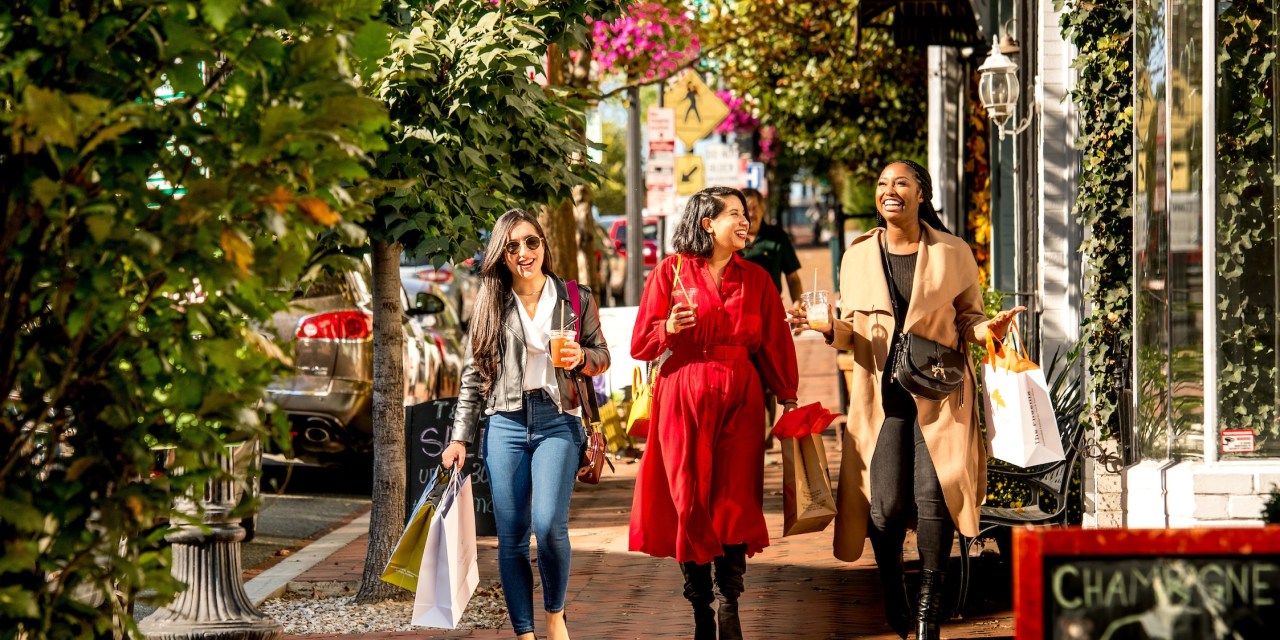 For many DTC brands looking to get their footing in physical retail, the Georgetown neighborhood in D.C. is prime real estate.

The historic neighborhood, which was initially established as a tobacco port town, is now home to some of the trendiest e-commerce brands. With its grand opening schedule Friday, DTC showroom Showfields signed a 10-year deal to open its first Washington, D.C. store in Georgetown. This came on the heels of store openings from other digitally native brands this year, including beauty brand Glossier and cashmere apparel company Naadam. For brands, part of the allure of having a store in Georgetown includes the neighborhood’s ability to attract both locals and tourists.

Nestled in between two universities and located along the Potomac River, the neighborhood attracted 12 million visitors last year. The neighborhood’s popularity and mix of tenants have become a draw for many online brands who want to enter the D.C., Maryland and Virginia market. The Georgetown Business Improvement District [BID] said there had been an uptick in online brands opening stores in the area this year with more to come in the next couple of months.

“Brands that really want to get their name out to a large audience, tend to look at Georgetown because we do have just so many tourists,” said Faith Broderick, economic development director for the Georgetown BID. “It’s really been the past five years when we’ve seen a larger shift from, typical brick and mortar to stores that started online.”

From apparel, food and beverage, around 30 new stores opened in the area this year, Broderick said. Among DTC brands, stores like Express-owned fashion brand Upwest, mattress brand Avocado Green and clothing brand Everlane are just some of the brands that opened doors in Georgetown over the past two years. Broderick said that the neighborhood is down to about 30 vacancies that don’t have leases, most of which have a larger footprint.

Stores like eyewear brand Warby Parker and jewelry brand Brilliant Earth have had stores in Georgetown for roughly seven and five years, respectively. But before they entered the scene, Broderick said traditional mall-based brands had dominated neighborhood, including Forever21, DSW and Aldo Shoes. However, she said many of these traditional brands closed during the pandemic.

Digitally native brands quickly swooped in to take their spot. For example, Showfields’ new location is situated in the space where business suits maker Brooks Brothers used to be after it shuttered the store in 2020. Dawn Price baby store is not the site of UpWest’s Georgetown store.

DTC brands tend to open stores around the same neighborhoods as their fellow online brands. Soho is another popular DTC hotspot, with brands like shoe brand Allbirds and activewear brand Vuori having stores in the area. South Congress Avenue in Austin and 12 South in Nashville are also some of the neighborhoods where DTC brands are increasingly looking to open stores in.

“A crowd draws a crowd in all cases,” said Philippe Lanier, principal at commercial real estate developer EastBanc, which owns some of Georgetown’s retail properties. “So oftentimes, brands like to be in co-tenancy that they understand.”

Lanier said that some of these DTC brands tend to target the same shopper demographic. Georgetown’s geographic location also gives it an established younger customer base because of the universities nearby. Brands have historically flocked to major metropolitan areas like Fifth Avenue and Soho. Now, more brands are seeking out more affluent areas and emerging cities as well.

The neighborhood’s mix of tenants and activities have also extended the dwell time of visitors. Pre-pandemic, Georgetown visitors tend to stay in the area for over an hour and a half on average. Now, it is seeing both a midday rush and an evening rush, Georgetown BID’s Broderick said.

When Glossier opened its doors to Georgetown visitors, Kleo Mack, Glossier’s SVP of Global Marketing, said in an email that the brand had attracted lines down the block.

“The neighborhood, and M Street in particular, has been a hub for retailers for decades, attracting locals, university students and young professionals, and tourists all around,” Mack said. “Operating a store in Georgetown is not too dissimilar from our other retail stores in that no two days look quite the same, and the incredible variety of people who walk through our doors all share an enthusiasm and interest for Glossier.”

Additionally, Georgetown also has activities and events that help boost traffic in the neighborhood. Georgetown has canal boat tours and held about five big events last year, such as the French Market and Georgetown GLOW. Broderick said that these events “adds a couple of percentage points to everyone’s bottom line.”

Another brand that is entering the neighborhood soon includes luggage brand Away Travel, according to Georgetown BID.

“We have the name recognition,” Broderick said. “Nationally, I think that Georgetown still carries a really important name for brands as they’re making their entry into the market.”