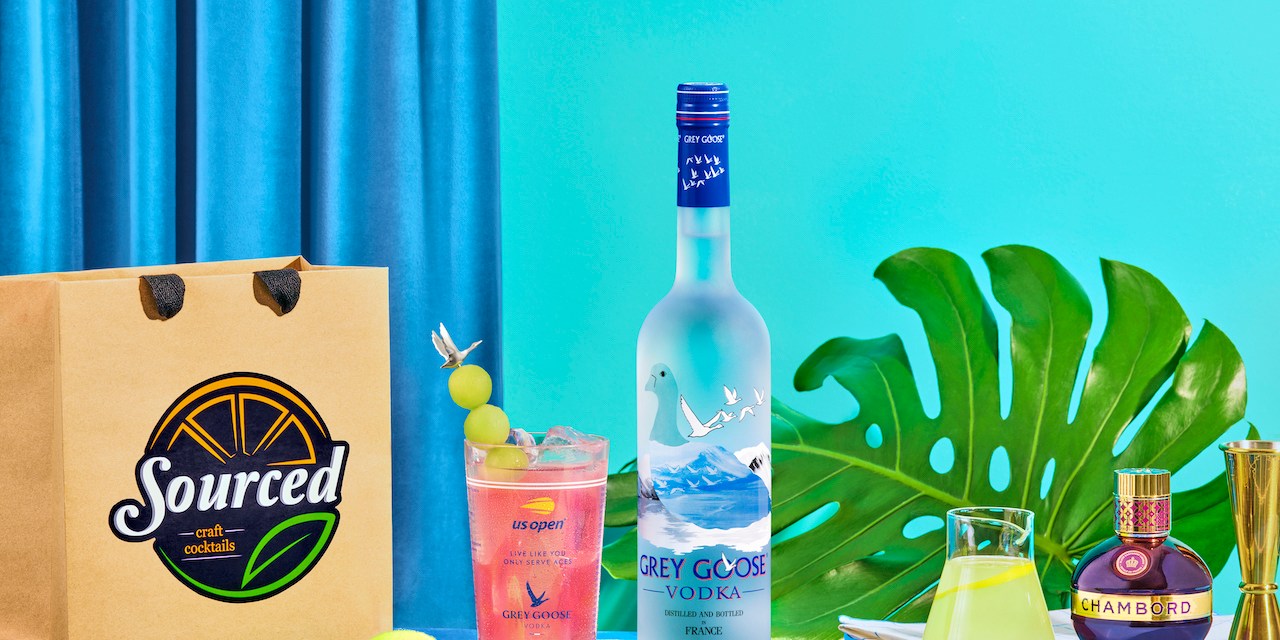 With no fans in the stands, this year’s U.S. Open tennis tournament marks a departure for how longtime sponsors like Grey Goose are going about digital campaigns.

Having been the tournament’s official alcohol sponsor for almost 15 years, Bacardi-owned Grey Goose is hoping to set the blueprint for how sponsorships could evolve beyond this year. The brand is tackling the challenge of engaging virtual fans with the launch of the Honey Deuce home cocktail kit, in partnership with Sourced Craft Cocktails. The campaign will also include a popup at New York’s Dante bar, which is serving the Honey Deuce at its outdoor patio and the kits to-go.

In past years, Grey Goose has been one of dozen corporate sponsors that help generate millions in revenue for the tournament. The campaigns have included on-premise fan events, as well as nearby brand activations like last year’s JFK bar popup. Perhaps most importantly, however, Grey Goose annually sold nearly 250,000 Honey Deuce cocktails — which contain lemonade, Chambord, honeydew melon balls and, of course, vodka. The drinks typically cost around $15 a pop. While the liquor brand has collaborated with Sourced on limited edition kits over the years, this latest U.S. Open campaign marks the largest event-related kit Grey Goose has launched.

Fan attendance of live events is essentially at a halt for the time being. And, as Modern Retail previously reported, alcohol brands are getting creative when it comes to making up for lost hospitality and other on premise marketing opportunities. For example, many brands sought out partnerships with delivery platforms for paid campaigns and social media ads.

Grey Goose is using this yearly event as a way to rethink digital engagement. “This year required us to break from our traditional approach and tap into consumer desire,” Grey Goose brand director Stacy Saltiel told Modern Retail. One way was by recreating the signature Honey Deuce cocktail of the U.S. Open — of which over a million have been served at the stadium since 2007 — for an at-home audience. The kit includes all the needed ingredients, including a bottle of Grey Goose and the collectible cups people would get when buying the drink at the match.

Live events are typically important ways for brands to closely communicate with audiences, as well as gather consumer insight, said Saltiel. “For the U.S. Open, working with an e-commerce partner helped to bridge the gap between the brand and the tennis fans at home,” she said. Using Sourced to handle the kits’ delivery, the company believes it’s found an effective and seamless way to get the Honey Deuce to customers as they’re seeing it on TV and social media. Grey Goose, she said, has been doubling down on its e-commerce program at the beginning of the year, which made the kit possible to implement quickly.

Both e-commerce and digital activations were a part of the larger Bacardi strategy before the lockdowns began, and will continue to be a long-term play for their brands, said Lorran Brown Cosby, vp of digital commerce at Bacardi North America, Grey Goose’s parent company.

The moves to digital entailed quickly shifting ad spend from the shuttered industries, like live events and travel industries, to online delivery platforms in order to reach customers at home. Originally, the parent company, which also owns brands like Bombay Sapphire and Patrón Tequila, had a multi-year plan to unveil these plans. The pandemic, however, caused them to activate new e-commerce marketing strategies in just weeks.

Now that consumers are getting more comfortable with the idea of at-home experiences, the company plans to keep exploring strategies around accessible activations, Brown Cosby said.

Grey Goose’s focus on digital engagement and home delivery is an attempt to ride an accelerating trend. According to Liz Paquette, Drizly’s head of consumer insights, “many consumers are still shaking up cocktails at home in place of their favorite craft versions at the bar or restaurant.” According to the alcohol delivery platform’s recent consumer survey, more than half (52%) of respondents said they’ve made more cocktails at home during the spring of this year than the past. Furthermore, 54% predict they’ll keep making them beyond summer.

Grey Goose specifically has observed awareness of alcohol delivery grow among its own customers. Another behavior at play, Saltiel noted, is that consumers are finding “any reason to celebrate as they adjust to a new normal,” including birthdays or just end-of-week virtual happy hours. “The Honey Deuce kit taps into both trends: cocktails delivered to your door and the return of tennis,” she said.

What Grey Goose and other U.S. Open partners have programmed around this year’s tournament has laid the groundwork for what sponsorships might look like moving forward, explained Saltiel. While large events and their sponsors traditionally heavily focus on the people in attendance, Saltiel said there is an opportunity to bring a broader group of consumers together around these cultural moments. “We certainly expect kit interest to continue into the holiday season and beyond.”

“The ultimate goal,” said Brown Cosby, “is to have a healthy mix between on-premise events and virtual activations.”