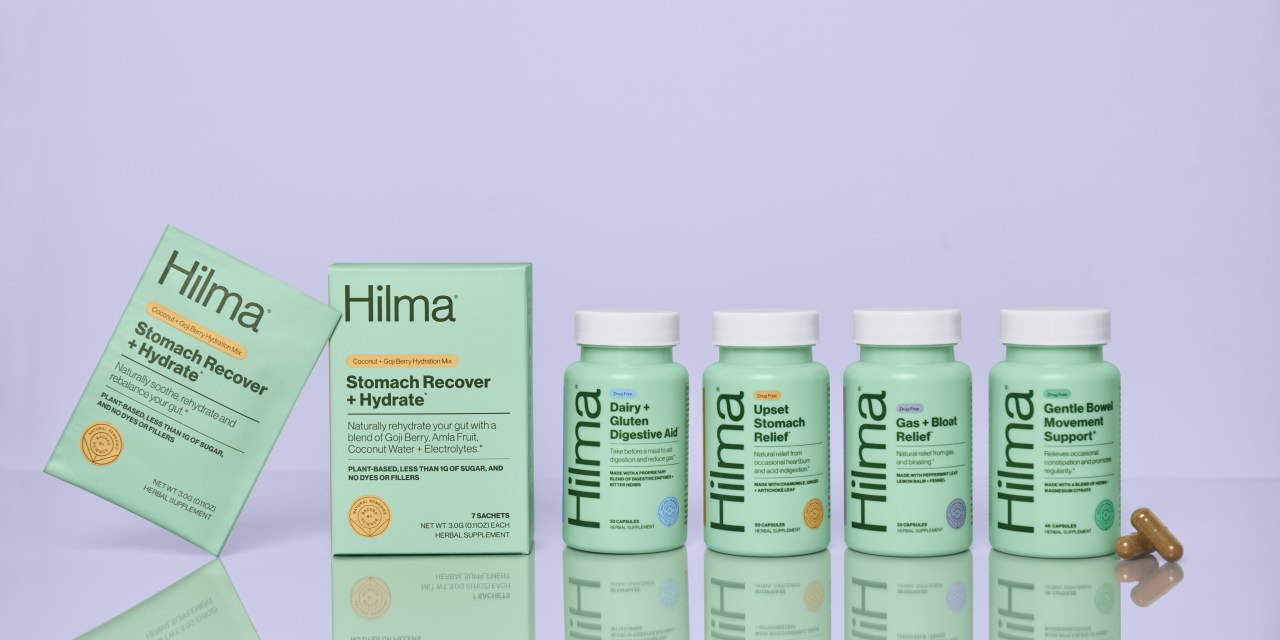 Hilma, which officially debuted in January 2020, and specializes in natural digestive relief remedies, will operate independently under Biocodex’s umbrella of brands. Biocodex generated revenue of 418 million euros in 2021. The group has a presence in more than 120 countries, including subsidiaries in 20 countries. Terms of the deal were not disclosed by the two companies.

In 2022, Hilma grew 100% year-over-year, and is due to debut at its first major U.S. drugstore chain during the first half of 2023. However, the brand’s exit – according to its founders – will allow Hilma to share research and development resources with its new parent company, as well as more quickly enter new retailers in the coming years. In a joint interview with Modern Retail, Hilma co-founders Hilary Quartner, Nina Mullen and Lily Galef discussed how the exit will impact the startup’s existing roadmap and growth plans. The company, which has raised a total of $7 million in venture capital to date, operates as an omnichannel brand with both a DTC and wholesale presence. One of the biggest selling points, according to the trio founders, is having more resources to scale the next phase of growth.

Hilma initially debuted with a direct-to-consumer website, and subsequently launched on Amazon and in Target in 2021. Since then, the startup has been actively trying to enter more retailers. According to co-founder and co-CEO Mullen, Hilma’s roadmap won’t drastically be altered for the coming year. “Our partnership with Biocodex will enable Hilma to rapidly scale our omnichannel retail strategy, reach new audiences and develop new products,” Mullen said.

Co-founder Quartner added that for the past two years, the Hilma team has been focused on growing and streamlining its product portfolio. “We’ve leaned into the digestive assortments, which have been our most popular products among customers,” Quartner said, which is an area that Biocodex also specializes in. Biocodex manufactures Florastor Probiotic, a daily supplement sold at major drug stores and retailers like Walgreens, Walmart and Target.

“When they reached out to us through an investor, acquisition wasn’t on our mind at this stage,” Quartner explained. The founders expected an acquisition to come in the next few years, given that many DTC brands wait at least five to 10 years post-launch to sell or go public. One recent example is Nutrafol, which launched in 2014 and sold a majority stake to Unilever earlier this year.

Currently, 25% of Hilma’s revenue comes from its retailers, along with specialty partners like JetBlue. The airline stocks Hilma stomach and gas relief products as one of its amenities. “Not all of these partners move the needle, but they help create awareness among our core audiences of 25 to 35-year-old women,” Mullen said.

The goal in the coming year, Mullen said, is to enter more mainstream channels like pharmacy chains and big box stores. “So in the near-term, the biggest resource we’ll lean on is Biocodex’s retail and Amazon expertise,” Mullen said. “Omnichannel is very important for Hilma’s future growth, and we’ll use their expertise to build new relationships with retailers.”

“At the same time, they [Biocodex] are excited to have us help give their brands a digital refresh in the U.S.,” said co-founder and chief brand officer Galef. Hilma’s team will help with digital strategies, such as DTC and U.S. marketing campaigns. In the future, hiring capacities will also be supported by the parent company, especially on the wholesale and retail side.

The move also comes at a contentious time for digitally-native CPG brands, as venture capital activity dries up. Lotano-Saba said that the retail health care category is further being fueled by large health companies — like CVS and Walgreens — investing in what she calls retail care. This refers to health care and medication obtained through pharmacies, minute clinics and urgent care, as opposed to traditional medical offices.

Erik Blazic, partner in the health practice at global strategy and management consulting firm Kearney, said that now is also a popular time for young health and wellness startups to seek out buyers, as “valuations have been attractive this year.”

This is largely due to consumers’ demand for these categories growing dramatically throughout the pandemic. CPG giants like Unilever, Nestlé and P&G have all scooped up health supplements and hydration brands over the past two years.

However, Blazic also cautioned that “at the same time, there has been a general slowdown in private equity-financed deals this year as interest rates rise and mid-range economic forecasts blur.”

Quartner said that overall, Hilma’s decision to sell was based on the scale Biocodex offers on a global level, which will especially come in handy given the challenges of growing a digitally-native brand in the current environment. These include higher-than-ever marketing costs, logistics and hiring experts to grow wholesale accounts.

“There is also the added challenge in being in the over-the-counter category, which requires extensive resources for product development and new retail reach,” Quartner said. “Being under the Biocodex umbrella will give us access to a wealth of research, which can be very expensive for us to do on our own.”