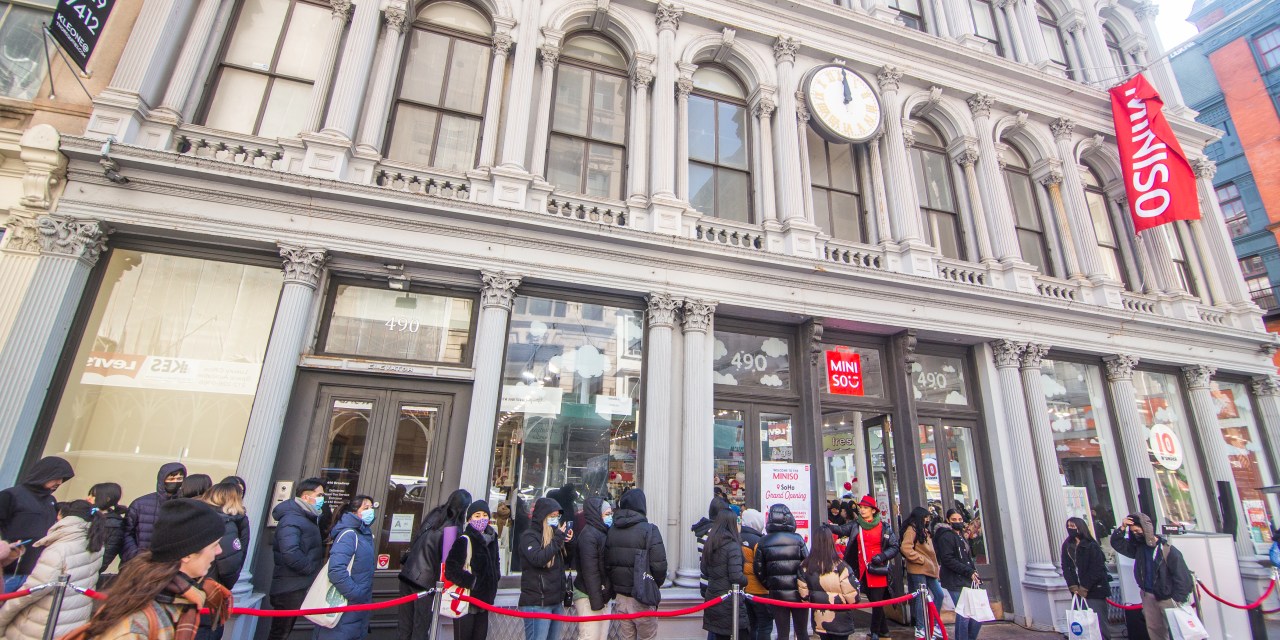 With low-priced goodies ranging from toys and makeup in tow, Japanese-inspired dollar stores like Miniso and Daiso — also known as 100-yen stores — are looking to grow their presence across the U.S.

Miniso, a self-described “Japanese-inspired” lifestyle retailer based in Guangzhou, China, just opened a store in Queens, New York in June. This comes just a few months after it opened its U.S. flagship store in SoHo, New York back in February. Meanwhile, Japan-based dollar store Daiso had also upped its footprint in the U.S. with new stores in both New York and Nevada.

Amid soaring inflation and more real estate vacancies, experts said this environment has created the perfect timing for the beloved variety discount store concept to make inroads in the country. Chain retail store locations in New York City, for example, grew by 2.7% in 2021, a relatively slow recovery from the number of closures in 2020, according to the Center for an Urban Future. Meanwhile, consumer prices went up 9.1% from a year before in June, according to the Labor Department.

Bella Tu, general manager of Miniso’s overseas operations, said the company wants to “achieve good revenue records” as it opens more doors nationwide. Miniso currently has over 50 U.S. locations, selling a wide selection of products from kitchenware to skincare products, mostly on the West Coast. Miniso said it has nearly 20 new locations planned mostly on the East Coast in the short term.

“History repeatedly reminded us that consumers tend to look for value in a high-inflation environment, and it is a good opportunity for MINISO,” Tu said via emailed comments. “We will leverage MINISO’s supply chain capabilities from China to strengthen our value proposition in [the U.S.].”

Miniso also recently opened a store in Chicago in July with plans to expand towards the east and central part of the country. Meanwhile, that same month, Daiso also launched a new store in Kent, Washington. Daiso currently has over 80 stores across the U.S. and over 2,272 stores in 24 countries and regions.

Similar to dollar stores in the U.S., stores like Daiso and Miniso sell an extensive and often eclectic array of merchandise, from beauty to home organization, at a low price point. Daiso, for instance, sells products for as little as $1.99. Meanwhile, Miniso focuses on a $10 and under price concept, where 95% of its products cost $10 or below.

Brad Jashinsky, director analyst at Gartner, said that the U.S. market, with its diverse population and robust consumer environment, is an attractive target for many retailers based overseas. Japanese discount stores, he said, are also able to provide the treasure hunting shopping experience that appeals to U.S. shoppers.

“A lot of retailers, they can only grow so much in a certain market, especially if they’re in a region that has either seen slowing growth or just doesn’t have as many retail opportunities as other countries,” Jashinsky said.

While Miniso and Daiso are aggressively scaling their business in the U.S., other Asian retailers have scaled back. When the U.S. arm of Japanese retailer Muji filed for Chapter 11 in 2020, the company said it would close unprofitable stores. Muji currently has around 10 stores in the U.S. from 18 back in 2020.

Because the sales of these discount stores lean heavily on in-store purchases over e-commerce, Jashinsky said finding the right location can be one of the biggest hurdles. However, because of the number of retail vacancies, he said these stores are in a position to find cheaper and more attractive real estate locations.

“There are so many vacancies out there right now that as malls kind of reinvent those giant department store spaces, it provides opportunities for these retailers to move in,” he said.

Riding the rise of Asian media

These shops could also benefit from the growth of the Asian American population. Between the years 2000 and 2019 in the U.S., the Asian population rose 81%, according to a 2021 report from Pew Research Center.

Along with the Asian American population, consumption of East Asian media such as anime and K-pop is rising.

“Whether that’s consuming anime on Crunchyroll or whether that’s watching Squid Game or being a fan of BTS, people are finding that cultural exports from East Asian countries like Korea and Japan are increasingly popular,” said Andrew Duffy, co-founder and CEO of incentive management platform SparkPlug. “These things are becoming much more popular than anything homegrown in the U.S. So I don’t think it’s a big leap to believe that the retail concepts and product concepts might be able to strike a similar interesting chord.”

Miniso has often formed collaborations with other brands. For example, the chain has sold BT21 products, an IP line co-created by K-pop boy group BTS and Line Friends. It has also launched a variety of Minions merchandise, like hats and key chains. Daiso, on the other hand, has sold Sanrio-themed products featuring popular characters like Kuromi and Cinnamoroll.

Duffy said that if these retailers see success, more overseas retailers might be inspired to enter the U.S. market as well. “I don’t see why a company that has a differentiated slate of products that can very quickly spin up a retail concept wouldn’t want to do it,” he said.