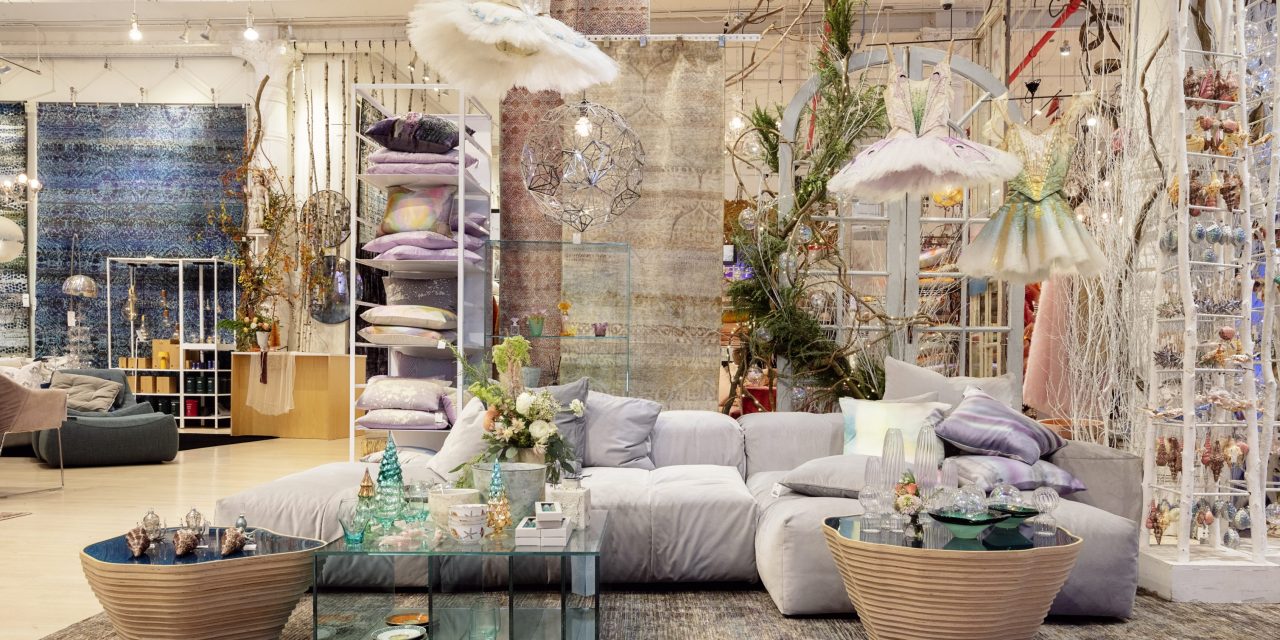 More than a year after filing Chapter 11 bankruptcy, historic homeware retailer ABC Carpet & Home is officially trying to come back as a digital furniture and home decor brand.

ABC opened as a rug market in 1897 on Broadway near Union Square, where the retailer is still located today. Over the years, the company branched out into other home furnishings such as furniture and decor. At one point, ABC’s globally-sourced merchandise took up six floors within the building. In 2005, the company boasted 350 employees and $80 million in annual revenue. Aside from its rotating displays of whimsical designs, the retailer has also become known for selling high-end furniture and rugs — with some of its rare antique rugs selling for over $100,000.

But now, after a sale and new management takeover by investment fund 888 Capital Partners in September 2021 for reportedly $26 million, the New York City-based retailer has downsized its footprint and is investing in new e-commerce features. It’s also turning to buzzy collaborations and digital marketing to help grow its name recognition, while saying it wants to stay true to its roots as a New York institution.

The reinvention arrives in time for the retailer’s 125-year anniversary. Now, the Manhattan flagship’s two floors have been redesigned as a marketplace-like showroom that acts as an extension of its online store. Currently, the majority of ABC Carpet & Home’s revenue still comes from its Manhattan store. But for 2023, the new management’s goal is to get the e-commerce and brick-and-mortar flagship’s sales closer to a 50-50 split.

At its peak in the 1980s, ABC had four large-scale stores and an outlet — with the Manhattan flagship and Brooklyn outlet remaining today. It first launched a website in 2011, featuring a limited selection of products and design content.

“The pandemic was painful for a company like ABC, having to shut down a big retail operation with a minor online presence,” Sid Banon, managing member at ABC Carpet & Home, told Modern Retail.

But after the 2021 sale, the company is now in the process of rebuilding its name. The first order of business was continuing communications with existing customers. At the time of the retailer’s bankruptcy filing, the retailer had about 2,000 customers whose orders weren’t fulfilled. “Our first mission was to satisfy every one, and after 13 months we have three left,” Banon said. The new management hired an external customer service firm to handle these inquiries.

Streamlining assortments was the next step, according to Suki LaBarre, vp of merchandising and e-commerce, who joined ABC Carpet & Home earlier this year from One Kings Lane. “The first couple of months was about stabilizing the business, and after a while we were able to focus on in-store and online merchandising,” she said.

“We’re working with a smaller footprint, so we’ve been challenged to do more with less space and every inch counts,” LaBarre explained. This meant being more thoughtful about creating the sales floor’s vignettes, which are ABC’s version of stores-within-stores that feature a specific theme focused on an artisan or brand.

“Now, the store needs to act as a portal to the website,” she said, in which the physical shop carries a curated assortment of available products. While ABC Carpet & Home relaunched its website in April, it is still in the process of rolling out new features to better reflect the store’s look and feel. Shopping for home furnishings online can be especially tricky for expensive items that customers often want to touch and feel before buying. To help alleviate these pain points, the website redesign will increasingly feature new product imagery, integrated video and brand spotlights.

“We have an unmatched assortment, so we want to protect and grow that business,” LaBarre said.

To freshen the assortment, ABC announced an ongoing partnership with another legacy rug seller, Stark Carpet. The Stark section features wall-to-wall carpeting and broadloom styles featuring minimalist and abstract designs. “That will act as the designated custom and broadloom destination,” LaBarre said. As for furniture and lifestyle products, she said “we’ll continue to focus on craftsmanship and artisanship, along with unique one-of-a-kind decor customers can’t find elsewhere.”

Decor has become a major part of the retailer’s business in recent years. Over the past 10 years, the business has evolved into a 50-50 business with carpets and homeware. “Today, you won’t see a carpet until going down to the lower level,” Banon said, noting that demand for homeware accessories has led to them taking up more real estate.

In the past, ABC leaned into the store’s reputation as a design destination for homeware fans. But overhauling the beloved retailer also means launching new marketing efforts that help grow its digital presence. “We grabbed the digital playbook by hiring a marketing agency, affiliate and PR marketing firms,” Banon said.

“We’re investing in technology to create an omnichannel experience, with Instagram, the website and store working in unison,” LaBarre said. Instagram, in particular, is a big channel for the retailer, which currently has 194,000 followers. “The goal is to create a more fluid interchange between the three channels,” LaBarre said.

When the company relaunched its website in April, about 20% of customers came from outside of the New York area, with the majority in California. “ABC did have a larger footprint in the past, but this was without any marketing,” Banon said. Former store locations include Los Angeles, Miami and an outpost in London’s Harrods, which all eventually closed. “So it’s nice to know that the brand recognition is there,” he said.

To build on this momentum, LaBarre said this year the retailer did a number of influencer campaigns and a handful of brand partnerships, some of which will debut in 2023. “This holiday season is particularly exciting, because we’re now in a place to invest in marketing campaigns and partnerships,” she said.

One of the current collaborations is a product edit by actress Sienna Miller, “which seemed like a no-brainer since she’s such a style icon and beloved New Yorker,” said LaBarre. The curated selection has been popular with website visitors, and the retailer intends to take the partnership into the spring.

Another new ABC collaboration is with the American Ballet Theater, another New York institution, featuring tutu-inspired in-store displays and a collection of festive, nostalgic decor pieces. “We’re looking for natural synergies with brands that have roots in New York and homeware,” LaBarre added. Meanwhile, nearby restaurants ABC Kitchen, ABC Cocina and the plant-based ABCv – all designed by the retailer – continue to showcase its products.

This series of collaborations is meant to translate the store’s energy to online customers who can’t visit in-person. So far, the reach is incrementally growing, thanks to social media buzz and past reputation.

Coming out of bankruptcy and getting back into growth mode is no easy feat. A number of brands that filed for bankruptcy protection during the pandemic are attempting to do the same.

“That was very difficult to replicate online,” Katz said. Now the challenge is to restore and grow that business again with a digitally-driven cost structure. Investing in e-commerce and driving volume through accessories, tabletop and bedding is a major opportunity, Katz said. “But it has great brand recognition within a certain set of consumers that can help carry it into the next phase,” he said.

Indeed, the retailer is counting on its cohort of existing high-end clientele, as well as new shoppers, to rediscover its offerings.

“ABC is a luxury lifestyle brand, so we’re always going to be in a higher tier,” LaBarre said. “But it’s important to always offer something for customers that allows them to be able to take a piece of ABC home with them.” This means offering gifts like books, candles and jewelry that complement the core assortment. “Now it’s about mixing old and new, and making sure we’re mixing and matching different styles and price points,” said LaBarre.

As for opening more stores, Banon said for now the focus will be on growing the online business. “Hopefully soon after that we’ll have an opportunity to expand the brick-and-mortar footprint,” he said.