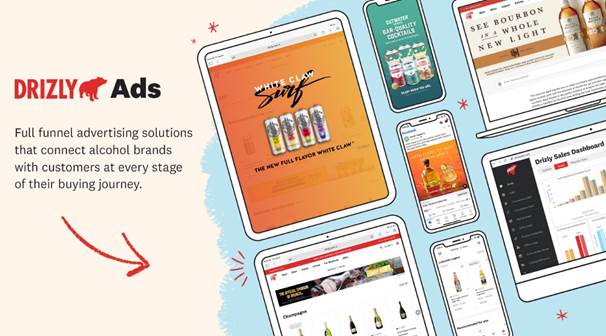 After experiencing a surge in popularity among alcohol brands, liquor shops and customers, Drizly is joining the ad network wave.

Until now, Drizly worked one-on-one with alcohol brands to build and display marketing campaigns on its website and app. Now, Drizly will allow all brands available on its marketplace to create search and display advertising campaigns — letting them target specific demographics and cities they’re available in. The company is counting on its new ad offerings to attract both established alcohol conglomerates and upstart brands to its platform.

Amit Patel, svp of Drizly Ads and Partnerships, told Modern Retail via email that Drizly’s new ad network builds on its existing tools that help connect alcohol advertisers and customers. Drizly does not own or fulfill any inventory but instead acts as a marketplace for alcohol retailers to offer local customers pickup and delivery orders.

The company began rolling out display ads across the Drizly website back in 2015, and ramped up sponsored campaigns in 2020 – when many brands moved their ad dollars to delivery services.

Drizly is joining the ranks of e-commerce platforms trying their hands at programmatic ads. It’s become a popular revenue driver among retailers and platforms over the past couple of years. Companies like Walmart, Uber and Instacart have built out programmatic ad networks as ways to monetize their digital presences.

On the advertising front, the company has especially been focused on working with diverse brands on their search and sponsored campaigns. One example is Drizly’s Black-owned brand section, featuring products by established spirits brands such as Cîroc and startups like Uncle Nearest 1884.

“This inventory was managed manually and therefore limited our ability to scale beyond a few partners to start, but was an early indicator for a need that was not being met in the market,” Patel said.

But with the new program, Drizly’s brand partners can design and control their own campaigns through a self-service hub.

Since being acquired by Uber last October, Drizly has continued to invest in its marketing offerings. To build out Drizly Ads, Patel said “we have made investments to grow our team across sales, account management, insights, product, tech and strategy.”

Drizly already works with a number of alcohol conglomerates on marketing campaigns, which Patel said will continue via Drizly Ads. Participating brands include Campari, Diageo, Moët Hennessy, Molson Coors and Pernod Ricard, among others.

But Drizly is also hoping to attract emerging brands to its self-service ad network. “We want to onboard a larger set of suppliers, including medium and emerging providers interested in marketing their products on our platform,” said Patel.

One such brand is low-ABV vodka Body, which debuted in July, and plans to use Drizly Ads in the coming months.

Body’s founder and CEO Jilly Hendrix told Modern Retail that “as a new player in the alcohol space we are excited to integrate Drizly’s new capabilities into our marketing strategy.”

Hendrix added that when it comes to competing with big spirit makers, having visibility on a major delivery service like Drizly is a must. Drizly’s North America network currently includes nearly 5,000 retailers fulfilling orders across 35 states.

Similarly, four-year-old Black-owned whiskey brand Duke & Dame will be adding Drizly Ads to its marketing mix. T0 date, Duke & Dame has mainly grown awareness through industry awards buzz and organic marketing, such as press and affiliate marketing. The company also heavily relies on retail partners for promotions; its most recent campaign ran this past summer in partnership with Total Wines & More.

Co-founder Amani Macaulay said that Drizly has “allowed us to expand our reach and sell to consumers where they are.” The move is especially important for a young brand with a still-limited availability across the country, Macaulay said.

“Building awareness is critical to growing a spirits brand,” Duke & Dame’s other co-founder, Chima Burey, said. “The ability to market directly to Drizly’s customer base will be a game changer for the industry, especially for smaller brands like Duke & Dame.”

Taylor Foxman, founder of The Industry Collective, a group of professionals from across the spirits business such as Casa Del Sol and DrnxMyth, said the ad network is a “very strategic move” by Drizly as it further taps into the busy alcohol marketing field.

“As the landscape for beverage alcohol suppliers continues to become more concentrated and competitive, brands will need to prioritize strategic advertising and marketing spend to keep up,” Foxman said. Given that most emerging alcoholic beverage companies don’t have mass market capabilities that players like Diageo and Pernod Ricard have, Foxman said a network ad helps level the playing field for small and mid-sized alcohol companies.

“Advertising solutions will play an important role in growing and strengthening our community,” Body’s Hendrix said. “And we’re excited to tap into one of the largest audiences of high-intent alcohol shoppers.”