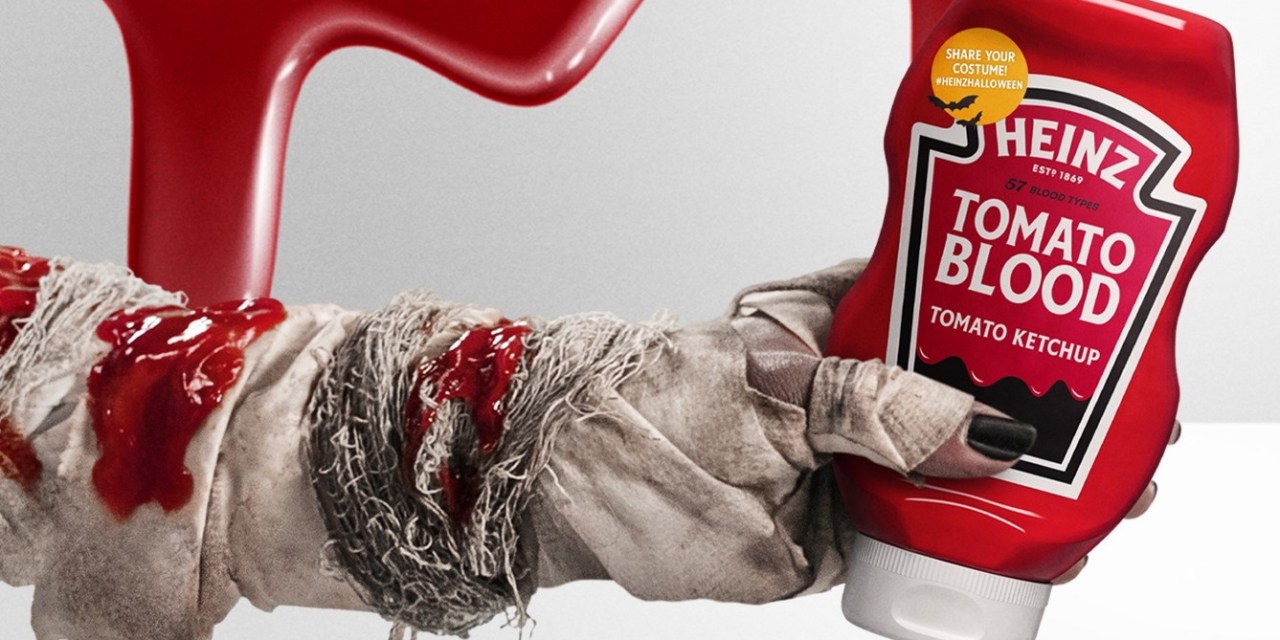 Heinz is the latest in a growing line of brands to embrace live video shopping.

In late October, the company worked with livestream e-commerce specialist Firework to take viewers inside its Halloween pop-up store in Santa Monica, California. Those who tuned into the live broadcast could buy ketchup blood-spattered mummy and corpse bride costumes for $60, among other spooky items. According to Heinz, the livestream was watched live by 4,772 viewers across YouTube, Facebook, and its dedicated Halloween website. The livestream accumulated an additional 271,500 replays on Heinz’s website from October 23 to 25.

The condiment giant’s adoption of shoppable live video is part of parent Kraft Heinz’s growing online marketing strategy. In its second quarter, the food company upped its overall marketing spend by 12% compared to the same period in 2019, with digital accounting for 70% of the marketing mix, up from 55% two years prior. Heinz said the quarterly increase amounted to an additional $100 million versus last year at a time when its expenses grew by 67% to $431 million. But, there are still doubts over whether the fragmented livestream shopping landscape offers a viable promotional vehicle for western brands and retailers.

The company’s first live shopping broadcast had all the hallmarks of a branded live video feed. It was hosted by influencers: in this case, Ebony and Denise, known online as Team2Moms, who create content about being a two-mom, multicultural family. They boast over 6 million social media followers, 5.3 million of which are on TikTok. The stream included creative activities that wouldn’t feel out of place on YouTube, like spooky makeup and costume crafting tutorials. In addition, the shoppable products were pitched as limited edition items to fit in with the fleeting nature of the live video feed.

For Heinz, the goal was to reach members of the public who could not attend its pop-up store in person. “By hosting our first livestream, we were able to connect with fans across the country who could watch the action unfold live, and actively participate without ever leaving the comfort of home,” Ashleigh Gibson, brand director, Kraft Heinz, said.

Alongside Christmas, Halloween has historically been used by retailers as a time to arrange in-store events for families. While the pandemic scuppered gatherings last year, some stores have resumed hosting them this year to build on recent foot traffic. But, with Covid-19 cases on the rise, it seems Heinz chose in part to embrace live video as a pragmatic marketing solution that could help it to engage wary consumers.

In that sense, the stream stood in contrast to some of Kraft Heinz’s other, more tongue-in-cheek, campaigns aimed at younger shoppers. This year, the company created two marketing stunts for its Oscar Meyer brand that were clearly aimed at going viral. In the summer, it partnered with Lyft to introduce a hot dog-shaped WienerMobile to its ride-sharing app. It followed that with a Twitter treasure hunt in September to promote its Oscar Meyer streetwear capsule collection. Both campaigns reflected its increasing emphasis on digital marketing.

Heinz told Modern Retail that it was pleased with the results of its first livestream. It said its biggest selling product during the broadcast was a $20 tomato blood costume kit that came packaged with a bottle of ketchup. The company is considering doing more shoppable livestreams as it looks for new ways to reach consumers, Gibson said.

However, distribution remains an issue for brands and retailers navigating a burgeoning live video shopping space that’s swimming with competing services, according to Jason Goldberg, chief commerce strategy officer at Publicis. Compared to China — where millions of people tune into live video sales events hosted by e-commerce giants like Taobao — the U.S. still lacks a livestream shopping leader, he said. “Fundamentally, livestream shopping in China is a form of entertainment,” Goldberg noted. “We are not seeing that same behavior in the U.S.”

Therefore, finding the right platform for a livestream is one of the primary issues brands face. Goldberg continued: “Retailers like Nordstrom have tried to host livestreams on their own websites, but customers aren’t in the habit of visiting their sites for visual entertainment.”

Meanwhile, tech giants including TikTok, Facebook and YouTube are still at the early stages of their livestream shopping experiments. There are also a smattering of live video commerce startups, including NTWRK, Whatnot, and Popshop Live, that have yet to find mainstream success.

A number of dedicated livestream commerce tech providers have surfaced to help companies navigate the fledgling sector. Heinz’s partner on its live video event, Firework, creates live shoppable videos that brands can host on their own websites. It claims that the “walled gardens” of Instagram, YouTube and Amazon Live yield low engagement rates, with less than a thousand attendees on average per livestream.

In the U.K., a livestream shopping company called OOOOO in October announced plans to open a 20,000 square-foot studio designed to be a content production and training facility for its clients, including fast fashion brands Boohoo and Missguided.

But, Heinz decided to focus its livestream efforts on its own website and social media pages. The company has roughly 2.3 million followers across social media platforms. That audience was too big a marketing lever to ignore. “The Heinz website is already a strong e-commerce destination for condiment lovers,” Gibson said. “Our decision to simulcast the livestream on social media and our website helped create an inclusive experience for consumers nationwide.”