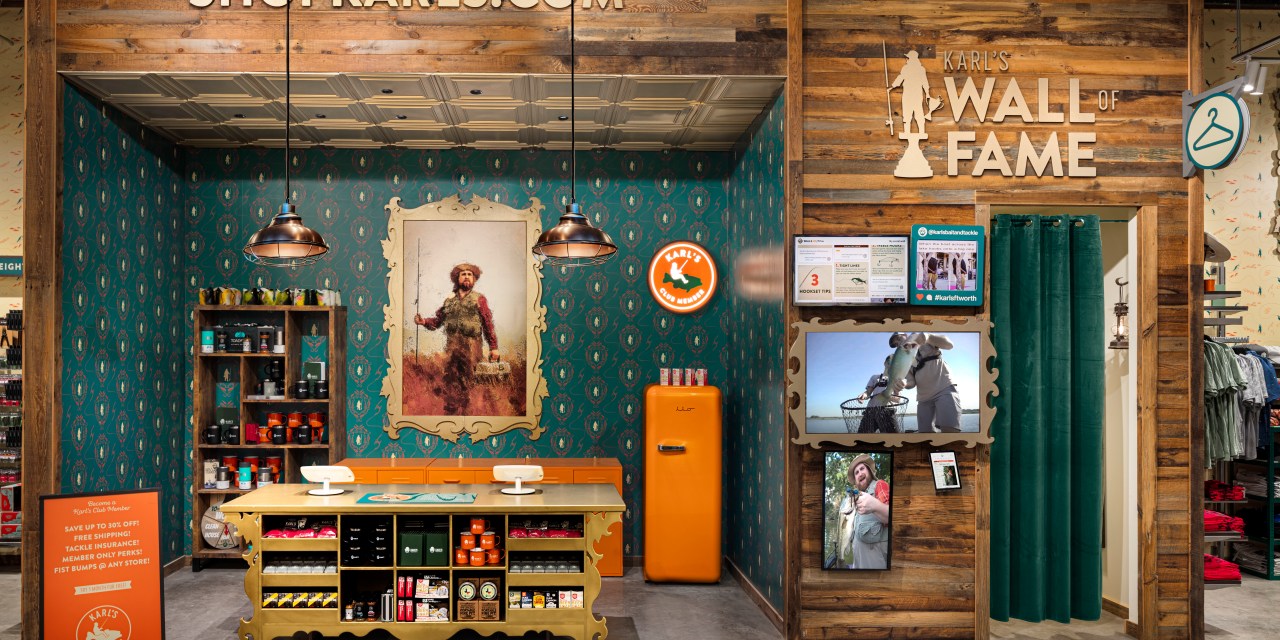 Online fishing retailer Karl’s Bait & Tackle is making waves with its new brick-and-mortar store in Fort Worth, Texas, a move that aims to further the brand’s appeal with new and experienced anglers as the sport takes off in popularity.

Karl’s got its start as the mascot for Mystery Tackle Box, a subscription box that launched in 2012. Five years later, it launched as an e-commerce space to sell a variety of gear. Now the Karl’s Fishing and Outdoors store, which opened this summer, aims to bring the brand’s fun and whimsical ethos to life, said director of retail experience Teeg Stouffer.

“You reach a point where you want a relationship with your customer that you cannot forge through the digital media that exists,” Stouffer said. “And so it became very important for us to start creating a platform where we could have real-life relationships with our customers.”

Recent years have been boom times for both Karl’s and the overall fishing space: Parent company to Karl’s and Mystery Tackle Box, Catch Co., has raised at least $61 million, with the most recent Series B funding in April 2021 raising $38 million. Meanwhile, the Recreational Boating and Fishing Foundation reports a nearly 15% increase in fishing participants since 2015 with increased participation among women and people of color. Kingpin Market Research says the global fishing equipment market will hit $14.5 billion in 2022, and reach $17.6 billion by 2028.

So far the store has been successful — Stouffer said the brand doubled its sales goal in the first week. And while overall, the gear industry is normalizing due to the influx of folks who bought it up during the pandemic, Stouffer said the DFW market is seeing 40% to 50% percent more traffic than other Texas markets since the store opened.

Catch Co. got its foothold in the market Mystery Tackle Box. But the Karl’s brand didn’t take off until the launch of the e-commerce website. It sells tackle box products, rods, reels, lines, clothing and other outdoor accessories.

According to the company, the store opening marks a development of the brand to invite in new anglers and create a tackle shop with a community-based feel. The Fort Worth store is located in a shopping plaza on the Trinity River, allowing for lessons and meetups. A second store is planned for Mall of America.

“It is about shopping. And it is about experiences and learning. But it’s also about community and giving people a landing pad to meet up,” he said.

A new type of store experience

Ideas to have a retail store were percolating before the pandemic, but hadn’t gotten off the ground yet, according to Stouffer. The Fort Worth location is not only close to the Karl’s warehouse, but the subscription box data showed that the Dallas-Fort Worth metro was one of the company’s most popular locations.

When it came to the store design, Stouffer said Karl’s wanted to do something different that would help attract new customers, make anglers of any skill level feel welcome and provide engaging experiences. The company also wanted to democratize an industry that often has a vibe of “testosterone and nostalgia” that can be intimidating to new audiences, Stouffer said

“We really have created something that’s inviting to people who don’t necessarily have a lot of experience in fishing, but that also feels very much at home for somebody whose lifestyle is the outdoors and fishing,” Stouffer said.

So Karl’s teamed up with brand experience agency ChangeUp. The firm’s chief creative officer Ryan Brazelton said his team first took a look at existing fishing retail — with aisles of lures and rods in big box stores, or insular local bait shops — that could feel overwhelming for a beginner.

“It’s probably one of the most inaccessible ways in to a sport ever,” he said. “It’s just so hard like, ‘What where do I start?’ So we knew we had to solve that.”

That led the team to create ways that people could touch and feel the products, and learn about the uses as they’re shopping. One example is the “lure wall,” which features unboxed lures that shoppers can pick up to trigger a video that shows how to use the bait, and what it looks like in the water. There’s also a digital version of a bait shop wall, inspired by the traditional of hanging up “hero shots” in local bait stores. This one is connected to hashtags and invites customers to share their photos.

“We knew we were gonna have the brag wall, but we knew it was gonna be little screens on the wall telling those stories,” Brazelton said.

A new generation of fishing participants

The Recreational Boating and Fishing Foundation said in a July 2022 report that the total population of fishing Americans hit an all-time high of 54.7 million during 2020 as people sought outdoor hobbies during the COVID-19 lockdowns. This dropped slightly to 52.4 million in 2021.

Stephanie Vatalaro, the senior vice president of marketing and communications for RBFF, said those are the only two times participation has crossed 50 million 14 years.

The sport is also getting more diverse, more female, and younger:

For Karl’s part, the pandemic contributed “significant growth” to the company’s bottom line, though Stouffer declined to give numbers. But as an an experienced e-commerce retailer at the time, he said the brand was ready to handle the demand. “The limitations that traditional brick-and-mortar retailers had during the pandemic was not a limitation, as we were really set up to deliver things to people’s homes,” he said.

But the sport does have high churn: with 11.6 million new participants and 14 million dropping out in 2021. Valataro said this is where in-store shopping can be a big support, as customers have the chance to learn from an expert about how to use their gear rather than buying something online.

“You have to wonder, maybe they made a purchase and bought something that wasn’t quite right,” she said.

She also said stores can help ease newcomers’ minds, for example, by asking at point of sales if they’ve secured a license, or giving tips on good spots.

“The opportunity for retailers and others in our industry is to help people get out on the water,” she said. “I think stores, to some extent, have settled into their regular customers and there’s an  opportunity to think about tomorrow’s customers, and make sure they’re being addressed.”