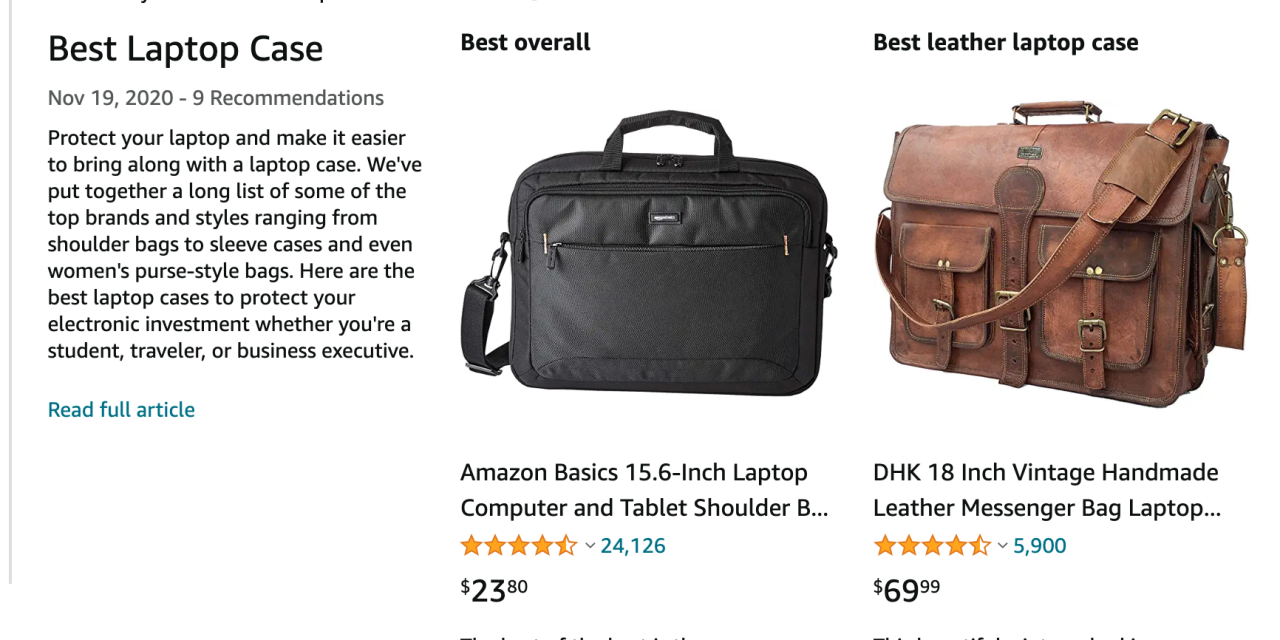 Publishers recommendations are being featured in Amazon’s own marketplace, and sellers are finding new ways to capitalize.

In 2018, Amazon launched an invite-only program for publishers called Amazon Onsite Associates. The goal was to bring product recommendations to the Amazon platform. Publishers enrolled in the Onsite Associates program create articles native to Amazon that highlight their favorite Amazon products for a given keyword — say, masks. The recommendations tend to appear in the third line of search results, and publishers earn a commission each time a customer clicks through and buys one of their recommended products.

Today, Onsite Associates has grown from a program of just around 30 U.S. publishers at launch to roughly 200 overall. They range from heavy hitters in the product recommendation space, like Wirecutter, to more obscure players, like Clean Eating Magazine. For Amazon, the rise of editorial recommendations appears to be a side-step away from the algorithmic recommendations that dominate its platform, most prominently in the form of the Amazon’s Choice badge, which itself is slightly declining in importance as a result.

On the seller end, editorial recommendations have quickly become coveted. Because they appear on the first page of search results, securing a spot in those recommendations promises a significant sales bump. Not long after the editorial recommendations began surfacing in search results on Amazon, sellers flooded Reddit forums and Facebook groups with questions about how they could get placement in a recommendation. And in recent months, some agencies have popped up with promises to facilitate connections between Amazon sellers and publishers enrolled in the Onsite Associates program — creating a behind-the-scenes industry of brokers that help sellers get their products on Amazon’s first page.

“We’re like a broker of information,” said Jack Bijou, the head of growth at Riverbend Consulting, an agency that offers a program to connect Amazon sellers to publishers enrolled in the Onsite Associates program, adding that it “acts sort of like a PR firm.” “We’re [there] on the client’s behalf and we get these listings in front of the publishers.”

Part of his success he attributed to the vetting process. Riverbend only accepts products that have at least 3.8 stars, have 100+ reviews, don’t make health claims and meet certain criteria in their ranking. (An ideal product, he said, has a rank better than 50,000 in its main category — say, Clothing, Shoes & Jewelry — and better than 100 on its subcategory, e.g. Men’s Athletic Shirts & Tees.) “We sort of now understand what will work and what won’t work,” he said.

A director that oversees one publisher’s Onsite program told Modern Retail that only about 20% to 30% of articles that it submits to Amazon will ever be approved. And of those posts that do receive approval, they don’t surface every time a customer searches the keyword. Sometimes Amazon will approve multiple editorial recommendations for a given keyword, and Amazon will rotate through them to see which receives the best conversion rate.

The same director told Modern Retail that for every 100 articles that Amazon has approved, roughly six to seven surface on a given day. (Jungle Scout, meanwhile, estimated that editorial recommendations are displayed in search results about 25% of the time.)

Is this a pay-to-play system?
It’s unclear how many editorial recommendations start out as pitches by brokers like Riverbend, but certainly not all do. The director who spoke to Modern Retail said that it doesn’t accept pitches. Stephen Reagan, VP of strategy at the Amazon marketplace consultancy Macarta, said that though editorial recommendations are a “hot topic” among his clients, most of the sellers he knows who have gotten placed in recommendations did so organically. “A lot of the ones where we have seen success are accidental features,” added Carly Miller, creative director at Macarta. The clients didn’t ask to be featured; a publisher chose them in what she said amounted to “happy accidents.” But the existence of a brokering system shows how quickly a new Amazon feature, like editorial recommendations, can give rise to a behind-the-scenes industry.

For both sellers and publishers, a lot of the inner workings of Onsite Associates remain murky. Some publishers previously told Digiday that revenues can fluctuate dramatically, even on a week-to-week basis, in part because Amazon has been testing how to make editorial recommendations most effective.

“My thing that I always tell clients is it’s a brand play,” said Bijou. “You’re getting your brand in an article by a professional publisher living on Amazon’s page for a few months.” He said, “the sales that come from it should be a bonus.”

But editorial recommendations — especially given the fact that they’re vetted by people, rather than by algorithms — don’t seem to be going anywhere soon. It might seem like there is a risk of an over-saturation effect, where eventually all of the top keywords have dozens of editorial recommendations pegged to them, and so each will surface infrequently. But Bijou said that Amazon seems to be guarding against that.

After a period of time — usually two to four months, although it can vary — “Amazon will take the article down,” he said. “Amazon wants the program to have turnover.” That means editorial recommendations give sellers an unprecedented amount of visibility on Amazon — but those recommendations aren’t built to last long.