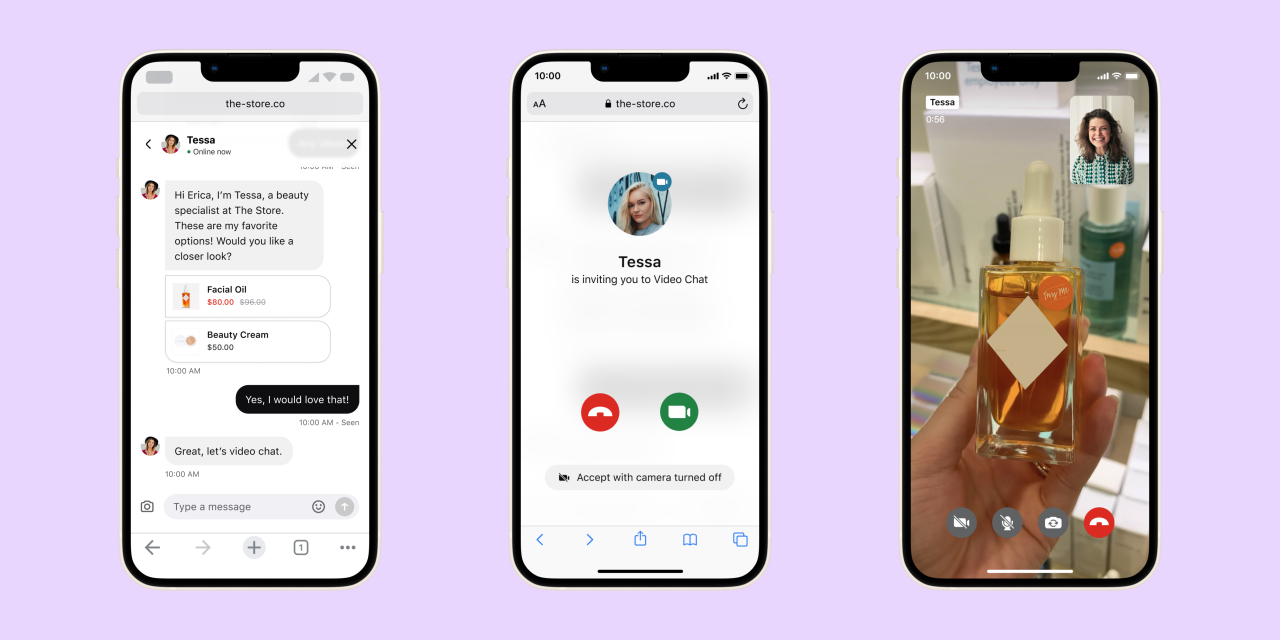 Nearly a year after acquiring online commerce startup Hero, Klarna has launched a virtual shopping offering of its own.

Through Virtual Shopping from Klarna, shoppers can connect with retail employees via live chats and video calls to get advice. On the retailers’ end, the new offering allows them to share photos and videos of products. It also allows retailers to perform live product demos from the store, at home or in dark stores.

Klarna acquired Hero in July last year for about $160 million, according to the Wall Street Journal. Klarna Chief Marketing Officer David Sandstrom told Modern Retail that the virtual shopping offering is just the first among many social shopping capabilities the company is working on, signaling its bet on social commerce.

“This first product that we call Virtual Shopping is pretty much the Hero offering that we’ve adapted to our ecosystem,” Sandstrom said. He added that Klarna plans to continue leveraging the talent and technology it acquired from Hero. “This is the first of, hopefully, quite many social shopping products that we’re going to see going forward.”

Founded in 2005 in Stockholm, Sweden, Klarna grew in popularity as a leading buy now, pay later provider with a global reach of 45 countries and over 147 million global active users. The company’s net operating income increased 38% in 2021 to $1.6 billion. Over the years, however, the company has developed capabilities beyond its well-known installment plans.

In November, the fintech firm launched an app that combines features like payment management, delivery tracking and returns. Shortly after it bought Hero last year, Klarna also acquired Apprl, a platform that facilitates collaborations between content creators and retailers.

“We don’t want to be seen as a payments company only, but really as a way to accelerate commerce,” Sandstrom said. “If we look at what we’ve [invested] heavily into in the last year, not least with the acquisition of Hero, it is really our marketing services. The ability to connect merchants with consumers and consumers with merchants in a smarter way beyond payments.”

Klarna’s Virtual Shopping capability is already available at 300 brand websites such as Levi’s, Hugo Boss and Herman Miller. The offering is available in 18 markets, including the U.S., Canada and the U.K. The company plans to extend Virtual Shopping to additional markets this year.

Shoppers don’t have to pay through Klarna to use the feature, Sandstrom said. But merchants partnered with Klarna pay a one-time set-up fee to use Virtual Shopping, which could vary based on the merchant’s size, the company said. In-store employees can also earn a commission for sales done through their virtual interactions.

Adam Levene, head of social shopping at Klarna and founder of Hero, said that online shopping has been missing the human touch or personalized experience that physical stores offer.

“We’re very bullish on the evolution of what e-commerce looks like. If you think of the last 20-25 years, [e-commerce] has been a fairly transactional experience,” Levene said. “We’re well-positioned to see the next wave of e-commerce and that is a far more social experience.”

Adriana Nunez, research analyst at Insider Intelligence, said that Klarna has been seeking to differentiate itself from other platforms, especially as the buy now, pay later space continues to grow more crowded.

“Online shopping [and] virtual shopping, we saw all of that explode during the pandemic during lockdowns,” she said. “But that space is going to continue to grow, obviously, not as much as we saw during lockdowns.”

Like Klarna, some fintech platforms have also been expanding their reach outside of their core payment offering. Affirm, for instance, acquired returns payments platform Returnly in April last year for total cash and equity consideration of about $300 million. Paypal released an “all-in-one” app in September that brings together shopping, savings, bill payments and crypto capabilities. “These new consumer tools, it’s really to help them attract both merchants and consumer spend,” Nunez said.

There are many ways Virtual Shopping could evolve in the future, with video chat being a key part of it, Levene said. He said the company also sees an opportunity in areas like shoppable video as well other clienteling experiences.

Sandstrom sees Virtual Shopping as a natural progression for the company as it aims to become more than just a payments company. He said Virtual Shopping is an offering that could potentially reshape how people shop. Last year, Klarna had also begun holding livestream shopping events, holding its first livestream event in the U.S. at the Macy’s Herald Square flagship location.