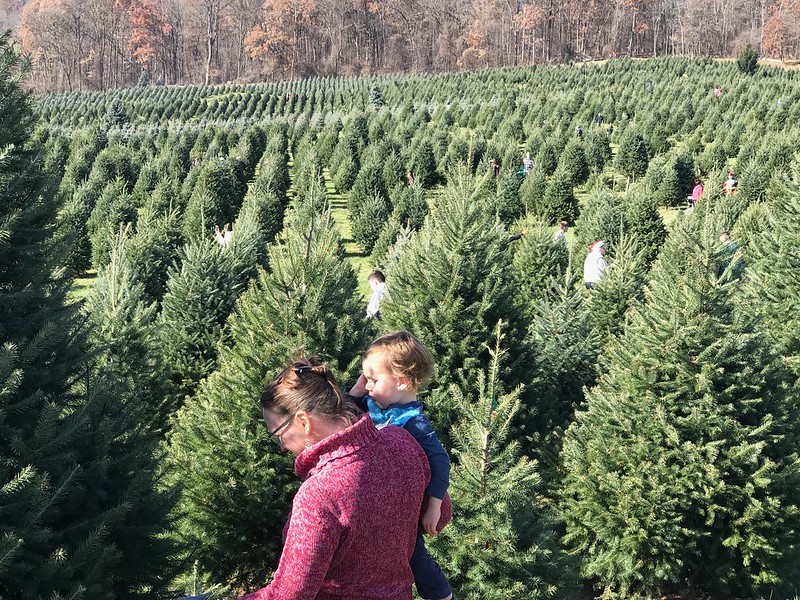 Americans are buying most everything online — and even the Christmas tree business is starting to feel the changing headwinds.

Most people don’t think of Christmas trees as an ideal e-commerce product. They’re big and bulky, and, unlike more consolidated sectors of the economy, the Christmas tree industry is made up of a patchwork of small, independent Christmas tree farmers. Choose-and-cut farms — where customers drive to a farm and chop down a tree themselves — made up 32% of overall sales last year, the largest segment.

But as buyers become more dependent on e-commerce, a growing number are beginning to look online even for Christmas trees. According to Google Trends data, searches related to “Christmas tree delivery” have nearly doubled this year. That follows broader trends across the industry. A small handful of DTC-style brands, like Walddie, have cropped up to offer delivery-focused tree sales. Even big players like Walmart, Home Depot and Lowe’s are stepping into the market, selling Christmas trees not just in their physical stores but also online. Since 2018, Amazon has fulfilled real Christmas tree orders for its third-party sellers.

Digital Christmas tree sales are on the rise — but ultimately, the Christmas tree business might show the limits of online ordering. Last year, a survey from the National Christmas Tree Association estimated that 6% of Christmas trees were purchased online — not quite a rounding error, but still a tiny fraction of the overall business.

For vendors who do sell Christmas trees online, though, 2020 has been a banner year. Michael Lyons, a vendor in Massachusetts, sells Christmas trees through two channels: his family’s in-person retail store, Dandi Lyons and a dedicated online shop called Christmas Trees In the Mail.

This year, he said, “the online store has gone crazy.” His online sales are up 300% to 400% compared to last year, and he’s expecting to have sold a few thousand trees online before the end of the year. By comparison, his in-store sales — where customers wander in and pick out trees held up by pegs — have stayed flat.

According to Lyons, who started offering online Christmas tree orders three years ago, shipping Christmas trees across the country is not easy. Lyons sources most of the trees from the farm of a close friend in Canada, then brings them to his Massachusetts distribution center. He has a team of 35-45 people alternating between work in the store and at the company’s distribution center. His team boxes up each tree in special boxes — all wax-sealed in order to trap the moisture — and then sends them out, to anyplace in the continental U.S., through UPS. He’s also started shipping much larger trees, which cost something like $500 each, through a freight company.

Christmas trees waiting to be shipped, via Lyons

But whether online stores like Lyons’ are the future is an open question. “Clearly it’s increased somewhat,” said Marsha Gray, executive director of the Christmas Tree Promotion Board, an industry-funded research organization, in reference to online orders. Citing the fact that Home Depot and Walmart had stepped up their delivery efforts, she said, “this year, we suspected this might be something happening a little more often.” But Gray noted that she doesn’t expect online orders to grow beyond the margins, and that is largely because people like driving to buy Christmas trees.

Ultimately, she said, the convenience of buying a Christmas tree online holds less sway than, say, buying dish detergent. When it comes to Christmas trees, “you’re selling something that’s not just the tree but you’re selling the activity, going out, being outside,” she said. Especially after a long year of quarantine, Christmas tree farms — because they are vast, outdoor spaces — are the rare safe spot for commerce, and people are turning out in large numbers to chop down their own. Across the country, real Christmas tree sales are on the rise. Gray said that “last weekend is the biggest Thanksgiving [weekend] we’ve ever had.”

While the growing encroachment of Amazon, Walmart and Home Depot into the industry has sparked concerns, she said that big-box retailers are really only involved in the Christmas tree business at the fulfillment level. They’re still relying on traditional Christmas tree farms to source all of those trees. “Amazon didn’t go plant Christmas trees, and neither did Lowe’s and Home Depot,” Gray said.

Yet others in the industry think the Christmas tree market is on the cusp of a bigger change. The problem, according to Lyons, is not lack of interest. It’s lack of awareness. “I still think that the future is massive because of how many people still don’t realize it’s an option, because it’s so new,” he said. “A lot of customers I talk to on the phone, they had no idea you could do this.”

If e-commerce does ever become a formidable share of the Christmas tree business, it might especially gain traction in warmer climates, where Christmas tree farms are few and far between. Even though Lyons is based in Massachusetts, 40% of his online Christmas tree sales go to Florida, he said, and another sizable chunk ships to California.

How big e-commerce plays a role in future Christmas tree sales remains to be seen — but some don’t believe a big change is afoot. As Gray put it, “really the uniqueness of getting your own Christmas tree is the shopping process. It’s the search, it’s the selection.” Referring to online orders, she said, “I don’t think it’s ever going to be a big driver in the industry.”

Lyons acknowledged that there might be a ceiling for online purchases. “There are some people who, no matter how big this gets, will never do it,” he said. But if there is a future for online tree orders, Lyons’ experience in Florida suggests a path forward. In parts of the country where Christmas tree farms are rare, buying online is more than just a convenience — it might be the only option.