After a year of digital only, physical events are on the up and up.

New data from a Modern Retail and Glossy survey of retailers and brands found that 30% of respondents had already begun investing in event-based marketing campaigns over the last six months. This follows a trend that began at the very beginning of 2021 — more brands and retailers were planning to up their overall marketing budgets. 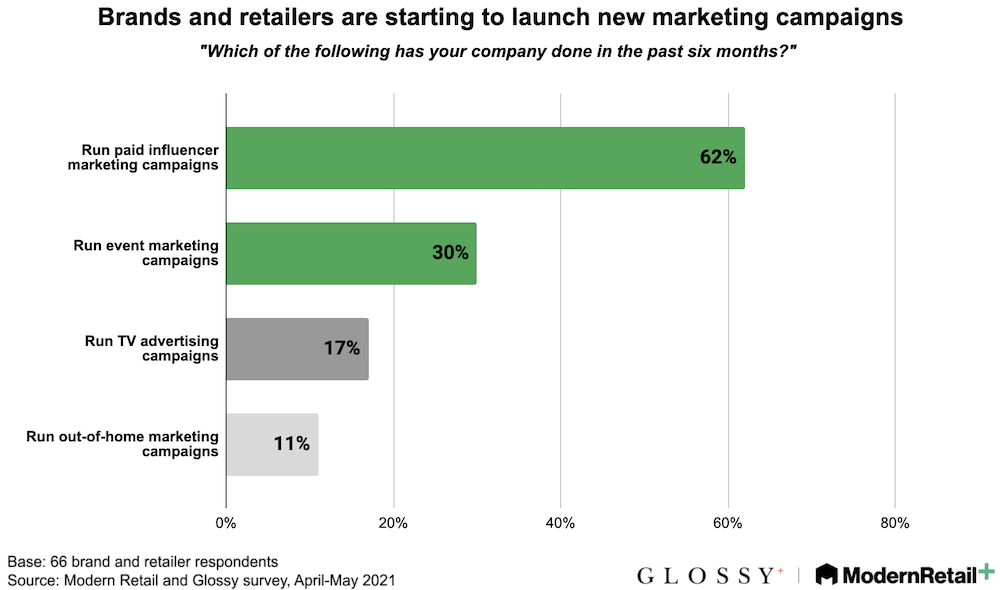 But the focus on events is especially noteworthy. Before the pandemic, many brands began doubling down on non-digital marketing channels. As Modern Retail reported in 2019, local events became a way for brands to garner attention without relying on increasing expensive digital acquisition channels. Lingerie brand Lively, for example, began hosting joint events with NYC plant shop The Sill, in an attempt to both broadcast its name in urban areas and attract new brand ambassadors.

“We needed for [ambassadors] to connect in real-life because by definition we wanted them to be a community,” said Lively CEO Michelle Cordeiro Grant to Modern Retail in 2019.

That more localized strategy all went out the window once the pandemic hit. But recent moves hint that events are probably coming back. Beyond the 30% of survey respondents who said they already invested in events marketing, 58% said they planned to invest in events over the next six months, as well. 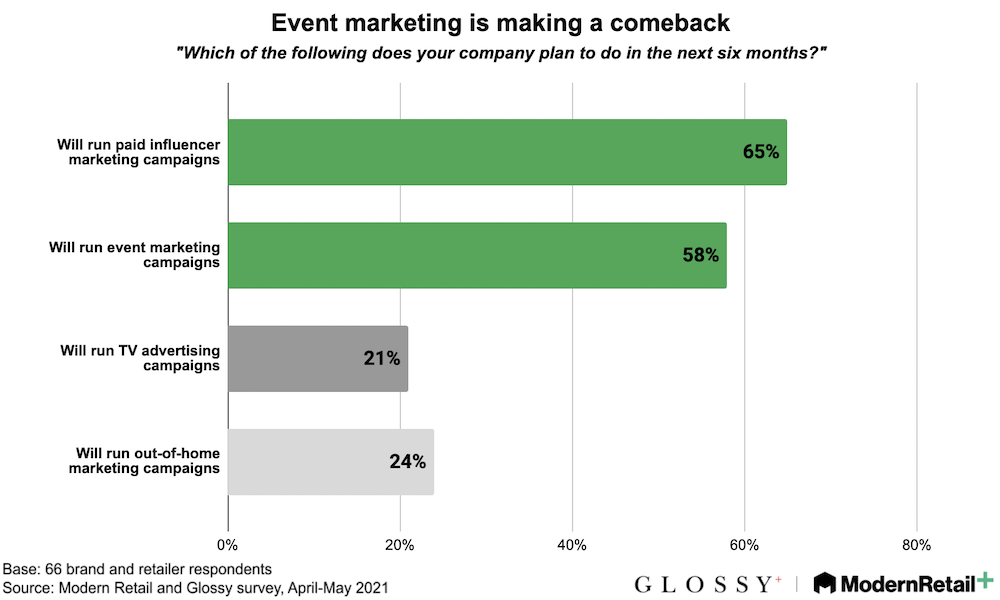 According to Melissa Gonzalez, CEO of the experiential retail firm the Lionesque Group, brand interest in in-person programming has been steadily ramping up. “In May, we got so busy,” she said. “People who were sitting on the sidelines saying, ‘Do we doing something, and when?’ have begun to change their tune,” she said. “It became more of a when than an if.”

In 2020, she explained, most events and in-store programming had a more clinical approach. According to Gonzalez, “People are [now] layering in experiential aspects.” She went on, “People are really trying to figure out how to layer in those moments of entertainment.” Gonzalez said that, before, most brands were looking at suburban locations for any physical events, and now urban areas are starting to pick back up.

Events aren’t the only campaigns seeing new signs of life. More brands and retailers are investing in influencer marketing, as well as TV and out-of-home campaigns. While many aren’t going fully into these more expensive channels, the growth does illustrate the way brands are trying to react to a possible post-pandemic world.

At the Modern Retail Virtual Forum, we’ll bring together senior retail marketers online to discuss the challenges they’re facing and the solutions they’re seeking in the era of smarter retail.