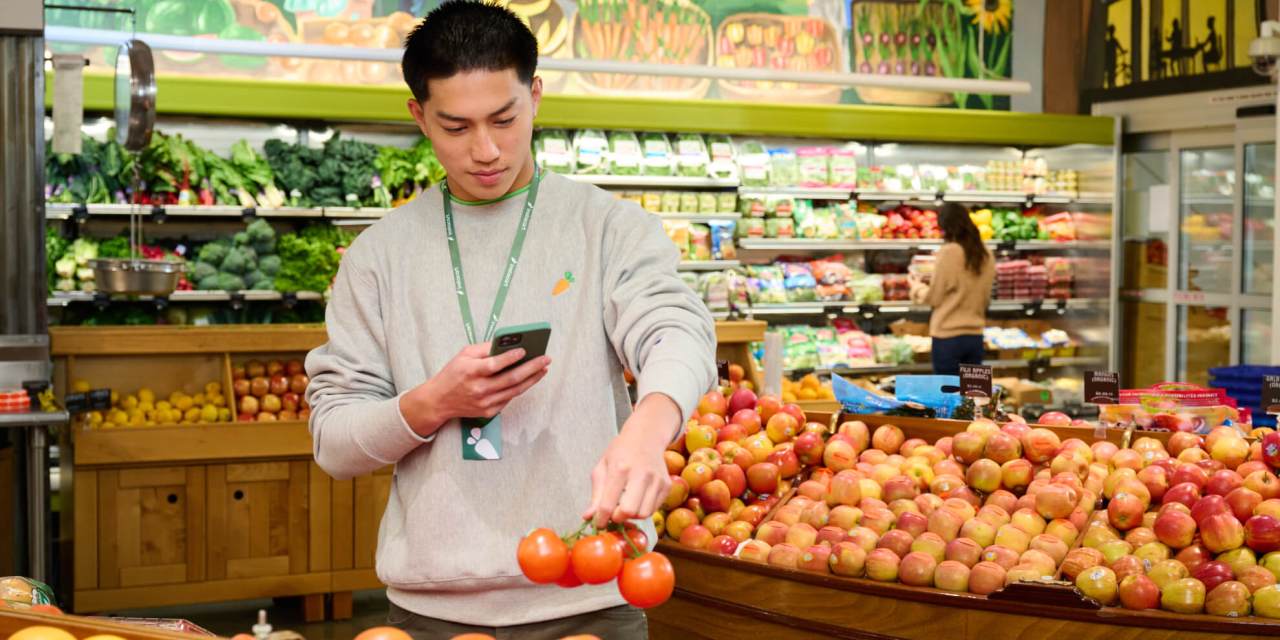 Ads have become a crucial part of Instacart’s business model — and advertisers are increasingly turning to the grocery delivery platform.

Ahead of its anticipated IPO, the online grocery delivery service has been hiring talent from Facebook and luring brands with the promise of granular sales data. But, with competition increasing as new delivery startups emerge, Instacart has found itself in a fragmented retail ad market. Its growth now rests on its ability to monetize more inventory and to deliver incremental sales revenue for advertisers, according to e-commerce ad automation platforms. With that, CPG brands — especially startups — are beginning to rely on Instacart more consistently.

The last year-plus has been huge for Instacart — as well as grocery delivery as a whole. In 2020, the company said it made $1.5 billion in revenue and that its advertising network made $300 million. It is now the second-largest grocery delivery and pickup company in the U.S. behind Amazon, with 45% of the market as of June, according to Bloomberg data.

Meanwhile, digital grocery sales as a whole shot up as much as 300% in 2020. But the growth in grocery deliveries and digital advertising has brought with it increased competition. Instacart’s rivals include retail giants like Walmart and Amazon; digital groceries platform GoPuff, which launched an ad platform earlier this year; and more specialty startups like Drizly, an alcohol e-commerce service.

One way Instacart is looking to ward off newcomers and cement its place in the retail media market is by expanding its ad product. To that end, it has hired veterans from digital advertising behemoth Facebook. Fidji Simo, who spent a decade at the social network where she oversaw its mobile app, became CEO of Instacart in August. Fellow Facebook alums Carolyn Everson and Asha Sharma recently joined as the company’s President and chief operating officer, respectively. It’s also increasing its retail partnerships, most recently teaming up with Kroger for grocery deliveries within 30 minutes.

With these latest advances, advertisers say they are increasingly allocating more budget to Instacart. The likes of Marin Software, Quartile, Pacvue and Skai claim their clients — ranging from multi-national consumer packaged goods (CPG) companies to independent brands — are making room in their ad budgets for grocery delivery services like Instacart, particularly following the pandemic. Some are even diverting funds to the category from their in-store ad budgets.

“In-store sampling was shut down during the pandemic, and that ad spend was subsequently moved to retail and digital media,” said Melissa Burdick, President of Pacvue. “Instacart was a clear winner here.”

To keep the momentum, Instacart has been trying to add new services to woo brands. The company launched a self-service ad platform last May, for example, and saw 500% advertiser growth in 2020. Instacart says it offers ad services for more than 2,500 CPG brands, including all of the top 25 CPG companies. In fact, ads have made the venture capital-backed service profitable even as online and in-store foot traffic has fluctuated, according to management.

The pandemic changed how people shop for everyday essentials. Consumers flocked to grocery delivery services amid lockdowns, drawn by their convenience and the promise of fast drop-offs to their door. Pandemic-induced behavioral changes are here to stay, according to ad automation platforms. They, in turn, have made the online shopping experience even more fragmented. Whereas in the past retail search was primarily limited to Google, now people with the intent to buy are looking for products directly on e-commerce platforms, according to Wesley MacLaggan, head of marketing at Marin Software.

“Customers are buying all over the place,” Nick Talbert, head of marketing at Quartile, said adding “there are certain things people buy on Instacart and other items they buy on Amazon or Best Buy.”

As it involves everyday essentials, grocery shopping is primarily intent-driven. For its part, Instacart has capitalized on this search fragmentation by launching an ad product that provides what brands crave: data.

The company’s solution allows retailers to create featured product ads that target customers who are using specific keywords. Brands can appear in specific search results or through banners and general ads on other pages, such as the buy-it-again page, or category pages like pages for “bread,” “eggs,” or “hair products.” As Instacart has expanded into cosmetics and office stationery, these ads are no longer limited to food.

“One of the things Instacart is doing that is smart is providing a lot of additional data to help brands prove their investments,” said Burdick.  “They know the key to brands’ budgets is data.”

“Leveraging first party retail data is a golden path ahead out of a much less measurable morass of a mass media strategy that dominated the lion’s share of CMO branding efforts as recently as four to five years ago,”  said David Sequeira, Managing Director at Skai.

In general, both Instacart and external agencies claim brands that use its ad platform are seeing a positive return on investment. Pacvue told Modern Retail that one of its clients reported that cost-per-clicks (CPC) were up to 10x cheaper than rival marketplaces, such as Amazon.

A few brands and agencies have disclosed some recent data about their success with Instacart advertising. Dairy-free protein bar brand No Cow saw a ​​32% increase in average units sold. It also saw two times the average click-through rate and 94% rise in basket penetration. Meanwhile, flushable wipes company Dude Products started with one product campaign on Instacart and subsequently increased monthly spend 8x and saw ad-attributed sales increase by 6x on the platform, according to Instacart.

Similarly, a case study published by media agency Effective Marketing showed that Savora Sous Vide, which specializes in packaged cooked meats, achieved a 3.7x return on ad spend (ROAS) on Instacart during the pandemic. In addition, healthy food brand BetterBody saw its ROAS grow by 28% in the first month of its Instacart campaign, according to Pacvue. It also reduced cost-per-click by 27% and cost-per-acquisition by 25%.

Another Pacvue client — a brand that makes personal health and wellness products like thermostats and face masks — utilized Instacart’s keyword recommendations, programmatic bid rules, dayparting and aggregate reporting and saw positive results. In the first month of using the platform, the company witnessed a 4x increase in ROAS, a 38% higher conversion rate and 56% lower CPCs, according to Pacvue.

These companies reflect the broader category of items that brands are advertising on Instacart. Namely, CPG and non-perishable products, according to ad automation platforms. For example, a Skai client in the food space, which spent $400,000 per month on Amazon ads last year, adopted Instacart and shifted its entire digital strategy into retail media. The expansion resulted in spending of $2 million a month on Instacart alone.

Smaller companies in particular, whether subsidiaries of larger conglomerates or independents, have found it easier to adopt the service. Obviously, to advertise on the platform, brands first need to get their products into grocery stores.

Quartile, for instance, counts Unilever subsidiary and supplements brand Smarty Pants as a client. The company was quick to start selling on Instacart as it had its own ad budgets and was not tied down to contracts with other stores. In a nutshell, Smarty Pants was free of many of the constraints that have held larger brands back.

“When you’re offering a bigger ship, you are slower to uptake on new tech,” Talbert said.

Even with this, Instacart still has a ways to go to reach the scale of the giants. Instacart said it planned to grow its advertising business to $1 billion next year. Amazon’s ad sales already exceed $22 billion.

“It’s early days in how much of their inventory they’ve monetized,” MacLaggan said. “There’s plenty of room for additional advertisers to try and get in front of their customers.”