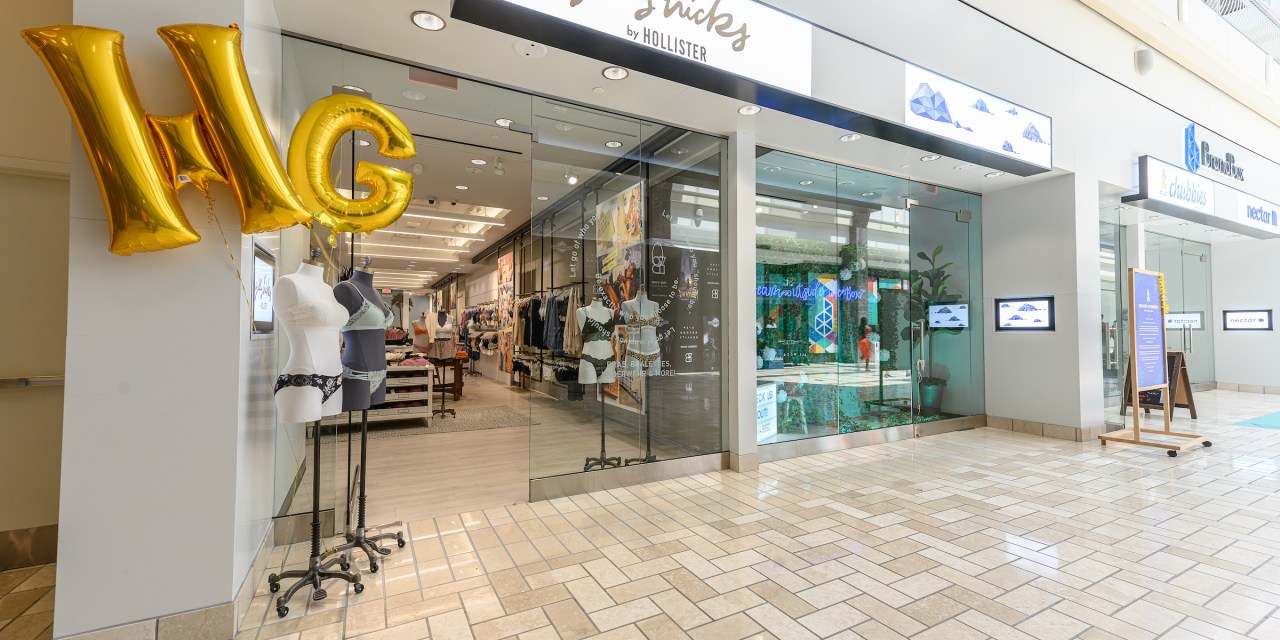 Hollister is trying to resurrect an old brand by using a go-to startup retail strategy.

On Monday, it announced it was opening four pop-up stores for its once-defunct lingerie brand, Gilly Hicks. The revamped underwear and bra line is the ailing retailer’s attempt to target a younger demographic, as well as experiment with store formatting championed by scrappy brands.

Gilly Hicks first launched in 2008 and five years later closed all of its over-two dozen stores. Abercrombie & Fitch Co., Hollister’s parent company, reintroduced the brand once again in 2017, putting the items back in stores and online, citing increased customer demand. The rollout for Gilly Hicks stores over the last two years has been slow, but now the four new pop-up stores join two other standalone locations.

One new location of note is a BrandBox in Tysons, Virginia. This offshoot of the real estate developer Macerich gives predominately digitally native brands a physical space to experiment with in-store experiences in their malls. Macerich’s former evp and chief digital officer Kevin McKenzie told Digiday last March that BrandBox was a way to court burgeoning DTC brands. “We needed to get into that world, thinking about the store less as a traditional real estate play and more as an acquisition channel and a place to serve the customer,” he said.

But Hollister is turning this strategy on its head with the Gilly Hicks pop-ups. Instead of being a scrappy online startup testing out physical retail, the 19-year-old retailer is aligning itself with a burgeoning slate of DTC companies as a way to give itself a new kind of brand cachet.

For both Macerich and Hollister, new programming is integral to staying culturally relevant. In Hollister’s case, the move is to experiment with smaller store formats to attract new customers — as well as avoid expensive large-scale real estate and pricy multi-year leases. Macerich, on the other hand, is trying to stay nimble as malls evolve. Traditional retailers have seen flagging sales and increased store closures, as Glossy recently reported, and real estate companies in turn have had to figure out ways to reinvent their spaces for the next wave of retail businesses.

According to Melissa Gonzalez, chief pop-up architect of the consultancy the Lionesque Group, these new Hollister pop-ups are a smart way to approach the brand relaunch. Gilly Hicks, she said, “is pulling itself forward, outside of Hollister.” Instead of being a big-format store, similar to its parent company, the lingerie brand is doing something more boutiquey, “where customers are immersed in the brand’s story.” In that sense, Gonzalez said, “it makes sense–if they want [the brand] to be reinvigorated.”

Small pop-up spaces provide the opportunity to do new sorts of branding and programming. “They might lean into things like having an influencer night,” Gonzalez said.

This move is part of Abercrombie & Fitch’s new overall strategy toward smaller, more intimate retail experiences. According to its press release, the company plans to open more Gilly Hicks spaces and “carveouts” as the year progresses.

The relaunch hopes to help reinvigorate business, which has been soft of late. At its most recent quarterly earnings report, Abercrombie & Fitch Co. reported a $19.2 million loss (down from the year’s loss, which was $42.5 million). Hollister specifically only reported 2% growth in same-store sales, which missed analyst expectations. The company’s stock price has been suffering for the last many months.

As big retailers attempt to change course with the shifting tides, expect to see more examples like this Gilly Hicks reboot. It will, however, have to compete with an ever-crowding playing field — especially in the retail space. Bonafide digitally native brands like ThirdLove, for example, are forgoing the online-only sales model and opening up their brick-and-mortar locations.

This, explained Gonzalez, is in line with current brick and mortar trends. “Small format retail is where consumers are gravitating to,” she said.