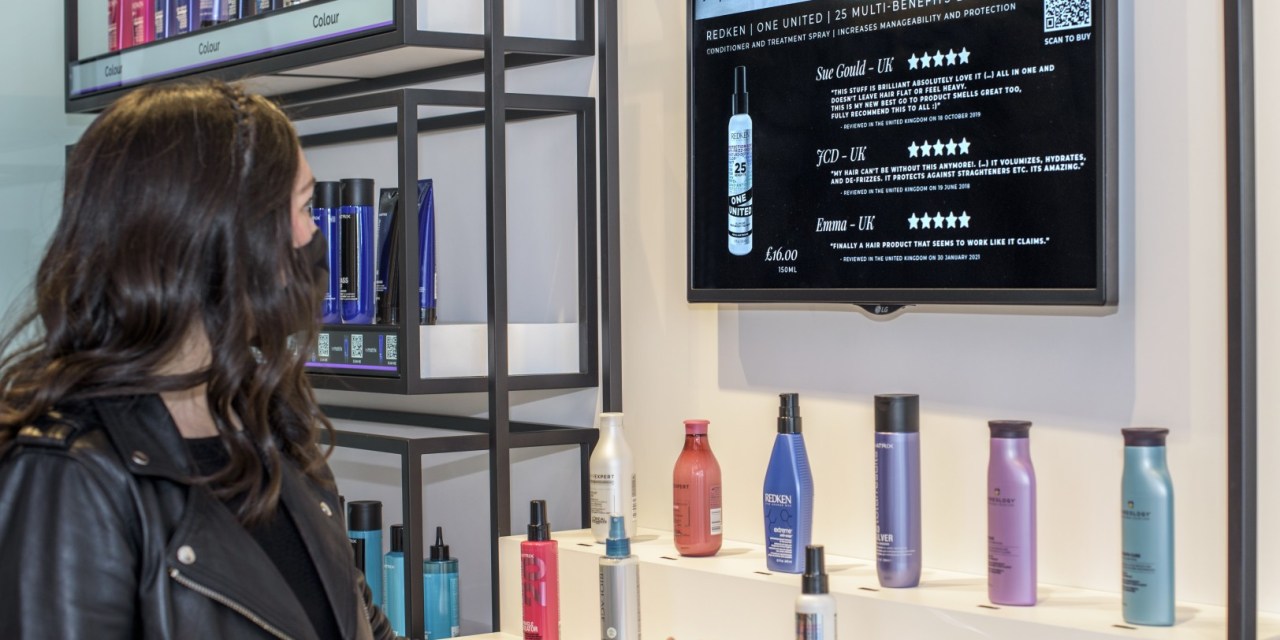 Amazon is opening a hair salon — but it points to loftier ambitions.

In London, Amazon will soon debut a physical hair salon, called Amazon Salon. A longtime salon owner named Elena Lavagni, along with a team of newly hired stylists, will manage the haircare side of the business. At first, only Amazon employees will be able to make appointments, but Amazon said that it will open to the public “in the coming weeks.”

In its statement, the company noted that this was, for now, merely an experimental one-off — “there are no current plans to open any other Amazon Salon locations.” Inside the store, everyone who shows up to the Amazon Salon, meanwhile, gets an Amazon Fire Tablet, where they can watch shows on Prime Video or buy more products online. “Every part of the experience is layered in with some transaction that is going to help Amazon,” said Elaine Kwon, managing partner at e-commerce consulting firm Kwontified. The store also integrates AR technology, so that customers can see potential haircuts or hair colors on a screen before committing to them.

Few people probably associate Amazon with the salon business — but the company has been making consistent beauty inroads. Over the past few years, Amazon has quietly built out a successful business-to-business platform for haircare businesses as well as individual hair stylists and other professionals — and that, potentially, will become the major beneficiary of Amazon Salon. With that, the launch of a physical salon seems much less about capturing the revenue from cutting and coloring hair, and much more about building Amazon’s credibility as a supplier of professional beauty products and beauty technology.

“I would say hair is the starting point,” said Kwon.

This isn’t Amazon’s first haircare foray. In 2019, the company came out with a product called the Amazon Professional Beauty Store, which brings wholesale discounts to stylists looking to buy hair and skin products to sell to their customers.

That wholesale business seems core to this latest salon endeavor. Although clients can show up and get their hair done, the Amazon Salon is also very closely tied to e-commerce. For nearby stylists that want to buy products from the Amazon Professional Beauty Store, the Amazon Salon is essentially a fulfillment hub — Amazon noted that it would offer quick deliveries, and no minimum order requirements, to stylists in the area who want to buy wholesale products.

To Kwon, the launch is a signal that Amazon thinks B-to-B can become a meaningful segment — and it wants to start in the beauty space. “B-to-B on Amazon as a whole is not as big as one might think,” she said. She noted that, right now, most of Amazon’s B-to-B offerings come through a program called Amazon Business, which gives companies bulk discounts on products. But she said, “A lot of businesses don’t even turn it on, and continue operating as if they’re a customer.”

“I think this type of launch is really Amazon saying we’re serious about B-to-B, we’re serious about expanding the B-to-B and wholesale part of our transactions grow,” she said. Kwon noted that, despite tracking Amazon’s B-to-B beauty efforts for years, “this is my first time saying, okay, they’re getting serious now. They want to make sure that this segment of their business is valued and growing.”

Stephanie Wissink, an equity analyst at Jefferies, wrote in a report this week that the new Amazon Salon appeared to be an extension of Amazon’s B-to-B push. She wrote that the Professional Beauty Store has kept sustained interest since its launch, and “the company continues to adds brands” across several segments within the salon space. Across the salon industry, product sales that are bundled with services make up 20% of overall revenue, making salons a potentially lucrative market for Amazon to capture.

Kwon said that Amazon knows that offering a service — like haircare — is the way to bring in people. “I think Amazon knows that in order to get people into a physical space, there needs to be a functional reason — in this case, cut your hair, get your hair done,” she said. But she said it wasn’t clear yet whether Amazon would attract a lot of one-off, curious customers, or whether the Amazon Salon would work well enough that it becomes a habitual visit for a large swath of locals.

Kwon added that Amazon’s concept stores have, in the past, varied in this sense: while she said Amazon Go is a popular, quick lunch destination for office workers, Amazon 4-Star Store “has become a tourist attraction in Seattle.” Amazon, she said, seems to take a wait-and-see approach with these concept stores. “I don’t think Amazon had a grand plan when they started it out,” she said of Amazon Go.

Leon Alexander, president of the salon consulting firm Eurisko, saw bigger ambitions. He recalled a quote Amazon gave when it first launched a physical bookstore. “They said we’re just doing a one-off test,” he told Modern Retail. Now, Amazon has over a dozen Amazon Books locations. He said he sees salons in the same vein. “For what reason would you do a test salon?” and nothing more, he said. “If they get this right, which I think they probably will, it will be a game-changer for the industry.”

He speculated that, if the Amazon Salon gains traction in Europe, Amazon could potentially launch its own private-label salon brand, as well as expand its physical footprint. “I think what they’ll do for example, in the States is they’ll open in New York, Seattle, Chicago, those kinds of key areas,” he said.