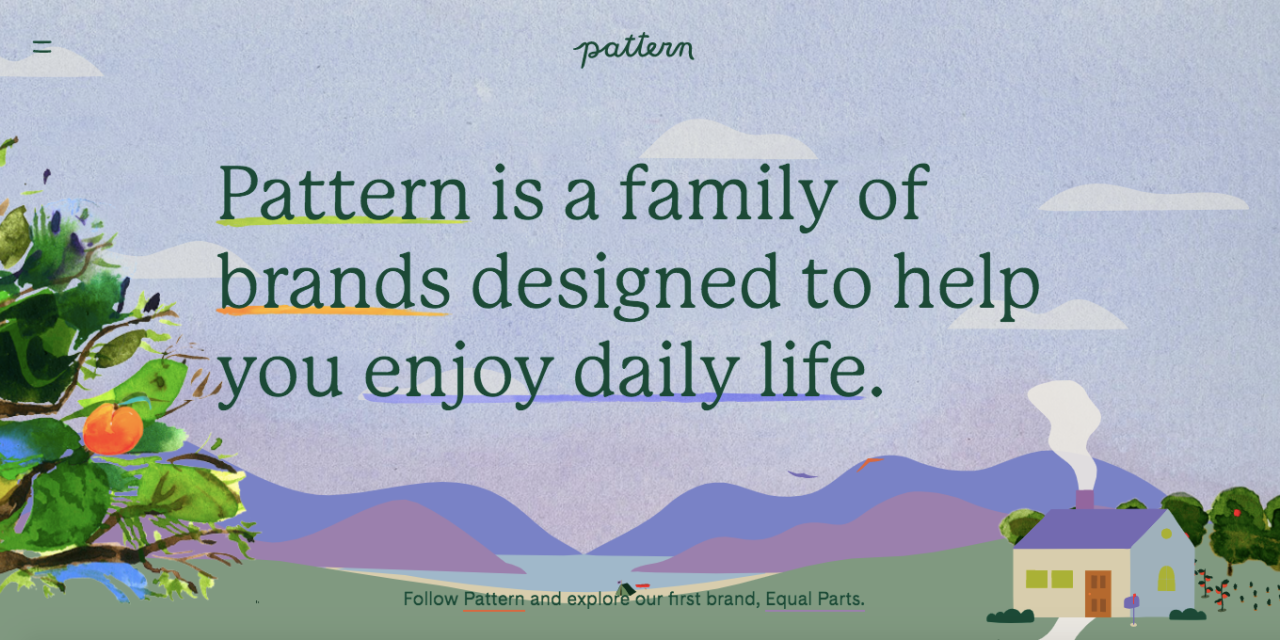 Gin Lane, the creative agency behind direct-to-consumer brands like Harry’s and Hims, is no more.

On Tuesday, Gin Lane announced that it is shutting down its agency work and rebranding to Pattern. Pattern will launch its own brands and operate them under one holding company. The company will launch brands with a focus on product categories that will help people deal with burnout and “enjoy daily life.”

The first brand, called Equal Parts, will launch this fall. It’s a cookware brand that will also focus on helping “guide” users in the kitchen with cooking class tie-ins, according to Camille Baldwin, vice president of brand at Pattern. Going forward, Pattern hopes to launch a new brand every three to six months. The company also announced on Tuesday that it had raised $14 million from firms including Kleiner Perkins, RRE Ventures and Primary Ventures.

Pattern joins Decoded Advertising, Deutsch LA and Anomaly in the long line of agencies that have tried to launch their own brands or product development arms. While Gin Lane has worked with direct-to-consumer brands for the past 10 years on developing their branding, their marketing messaging and their websites, it doesn’t have experience developing a supply chain or calculating how to ship and fulfill orders cost effectively — areas in which many agencies that try to launch their own products have struggled.

In preparing for the rebrand to Pattern, Gin Lane has sought to hire for some roles in areas in which it lacks expertise, and plans to ramp up hiring throughout the year. It also stopped taking on new agency work for the past three months, and for the past year has sought not to take on any new clients who compete too directly with some of the product categories Pattern plans to get into.

Pattern is betting that its expertise in branding and developing compelling creative, combined with the cost-cutting that sharing services like design and customer service between brands will enable, will put it on the path to developing a profitable holding company. But until the company launches its first brand, it’s unclear just how well Pattern will be able to navigate some of the unfamiliar aspects of scaling a company.

Emmett Shine, the former executive creative director for Gin Lane and now the co-founder of Pattern, said that the company decided to shut down its agency work because it wanted to keep working with early stage founders, but wanted to take greater ownership in building brands themselves.

“I think what happens with a lot of agencies — and you see this across many different fields whether it’s design, branding, technology, PR, communications, etc., is you help or play a role in creating brands that become worth a lot of money, and at a certain point you’re like, ‘Hey I wish I took some equity [in the brand]'”, said Richie Siegel, founder of retail consulting firm Loose Threads. Indeed, Gin Lane has taken on some equity from some of the brands it helped launch, including Harry’s, Quip and Smile Direct Club.

Shine said that Gin Lane first started telling clients about a year ago that it was considering rebranding to a holding company, and asked them for feedback and what concerns they might have in Gin Lane ditching its agency work. He also said that as Gin Lane got more serious about its brand-building aspirations, it sought to learn more about how some of the startups its worked with have managed the challenges many early-stage DTC companies face.

“In building a lot of these startups, we’ve been working with some of the founding teams 12 months and more sometimes,” Shine said. “We’ve been able the last few years to see the process for how to go about the global supply chain, how to choose manufacturers, etcetera.”

Earlier this year, Gin Lane began hiring general managers to oversee each of the brands who have expertise in helping startups scale, like Tyler Sgro who formerly worked on global operations and the supply chain at Harry’s. Other hires this year have included a vice president of engineering to oversee supply chain management, and a manager of retention marketing.

Pattern is not giving specifics yet about how exactly it will encourage customers of one brand to buy products of another — a key challenge for any holding company. Baldwin said that “there is definitely going to be cross-communication between brands,” but also that it wants consumers to think of Pattern as its own brand.

“In theory [Pattern] should be able to use learnings from Equal Parts to inform the execution of whatever the next brand is, and with that theory each brand should get better and kind of more optimized,” said Emily Singer, marketing manager at Alma and the founder of an e-commerce newsletter who first spotted job postings for Pattern in May.

In building a brand centered around helping customers disconnect with technology, Pattern is also hoping to eschew some of the modern conveniences consumers have come to expect from today’s direct-to-consumer brands. For example, Pattern is planning to only respond to  customer service questions on its Instagram account on Monday, Wednesday and Friday from 3 to 5 pm EST (though the individual brands themselves will have more regular customer service hours).

But by taking on venture capital funding, the clock is ticking on Pattern to prove out its model.