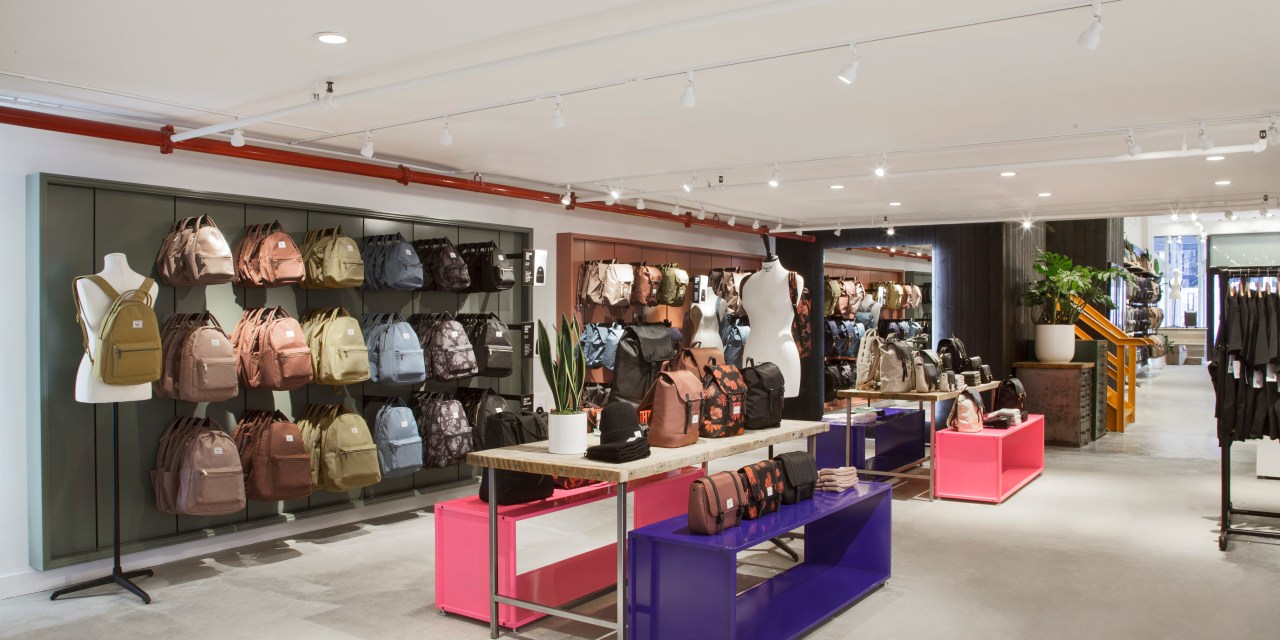 After years of selling through retail partners in the U.S., Herschel Supply Co. is opening its own stores.

The Vancouver-based company, founded in 2009, has become known for its utilitarian backpack designs. Herschel’s bags and accessories are sold at over 10,000 stockists around the world, including major U.S. retailers like Nordstrom, Bloomingdale’s and Dick’s Sporting Goods.

This week, the company is opening its first permanent U.S. store in New York City’s Flatiron District – the first in a series of new locations. Herschel Supply plans to go from the current four stores – all located in Canada – to 12-plus stores in North America by the end of 2023. The majority of the new locations will focus on major U.S. cities, where Herschel already has a robust customer base. This phase marks the start of an ambitious physical retail expansion, as the company tries to grow its DTC business to account for a bigger portion of revenue.

Niko George, the newly-hired director of global retail at Herschel Supply, said that 80% of Herschel’s revenue comes from wholesale while 20% comes from its DTC website and stores. “We want that to be more balanced over the next few years,” George said. “We already have a robust presence at major retailers across North America, but we want to create a halo effect in our biggest markets through our own stores.”

Previously, Herschel tested temporary pop-ups in major cities like New York and Los Angeles. According to the company, its new U.S. stores are designed to act act a destination for the brand’s biggest fans, offering exclusive events and programs shoppers can’t find at Herschel’s retail partners.

“Investing in brick-and-mortar will also help us share resources across our DTC channel, especially marketing and fulfillment,” George added. The company plans to roll out buy online, pickup in-store in the coming year.

Some of the cities George said Herschel eventually hopes to open stores in include Chicago, Washington D.C., Boston and Seattle.

“Because customers already have many other channels to buy from us, we want to differentiate these spaces through workshops, panels and other unique events,” George said. He added that the retail team’s strategy is to tap local artists and vendors to help make each store more localized. For instance, the new New York City store will feature an artist-in-residence program, with a dedicated gallery wall and lounge space to feature the work of these local artists.

The new Flatiron location, located at the corner of Fifth Avenue and 19th Street, features 2,500 square feet of sales floor space. George said that bags are still the brand’s bread and butter and will be the main focus of all stores. However, growing Herschel categories like travel accessories, luggage and apparel will also take up floor space. “We just launched a workwear line that we want to highlight through our own store displays,” George said.

Retail consultant Rebekah Kondrat said that this is a tricky time for brands to open standalone stores, and many are trying to take advantage of any leftover pandemic-era real estate deals. “Real estate has come back up, and in some cases like big cities, lease rates are even higher than 2019 levels,” Kondrat said.

The key is in utilizing the square footage as more than just a marketing play, she added. That’s where unique features, like exclusive SKUs and educational product testing, can come in handy to entice customers to visit a brand’s standalone store. “If you’re building these community hubs for customers, it’s important to know who they’re for and what makes them worthwhile,” Kondrat said.

For Herschel, the goal of the new retail footprint is to get more customers thinking about shopping from the company’s owned channels, George said. “Whether it’s through unique seasonal campaigns, or offering product demos and expertise that customers can’t get anywhere else,” he said.