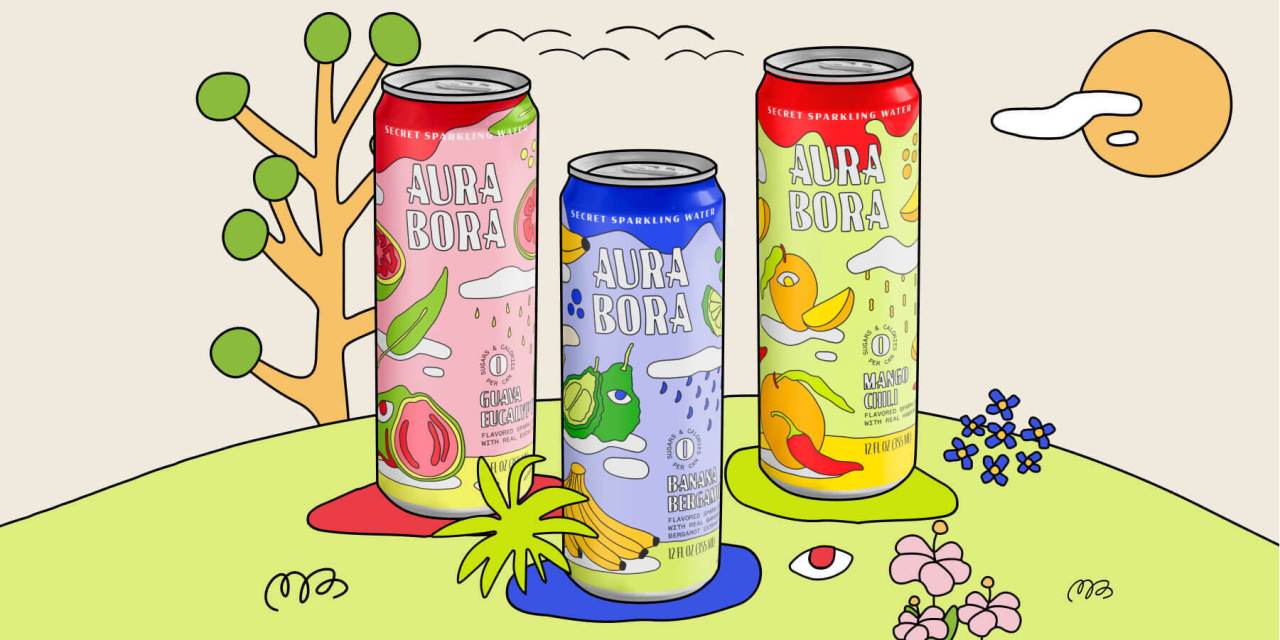 Last week, startup Aura Bora stealthily released a few new flavors of sparkling water — ones that even the brand’s most loyal customers might have missed if they weren’t checking their inbox. On July 25, the company released its first “secret menu” on its website — protected by a password only sent to email subscribers and rewards members. The menu featured three new flavors: banana bergamot (the brand’s take on cream soda), the tropical-themed guava eucalyptus and mango chili.

Long used by fast food restaurants, offering off-the-menu items have been a staple at chains like Starbucks and In-N-Out. To customers in the know, ordering these items has become a badge of honor, with vast media coverage dedicated to these menu changes. Aura Bora co-founder and CEO Paul Voge said the idea is to apply these viral fast food menu tactics to the sparkling water brand, with only the most observant customers able to order the limited-time flavors.

“Our products are already unique compared to most sparkling water brands,” Voge said. “We’re already doing drops, so we thought: what if we up the dosage of weirdness?”

All three flavors ended up selling out within 23 hours. The company initially projected it would at least take a couple of days to sell out. “The result tells us that our email subscribers are loyal to our new releases,” Voge said.

Part of the secret menu strategy is to quickly test new products that retailers may not go for.

“For example, I’ve always wanted to use bergamot but it hasn’t worked in anything,” he said. “If nothing else, it makes for a fun gag gift.”

The latest menu’s success showed the Aura Bora team that they can push the envelope with more offbeat flavors. For one: these flavor profiles, Vogue said, are riskier than the brand’s typical limited-edition drops, which in the past included ginger Meyer lemon and elderflower grapefruit.

The direct-to-consumer channel is a small portion of Aura Bora’s sales, with the majority coming from retail; the brand is currently available at 3,500 stores right now, including national chains like Sprouts and Whole Foods. “But DTC orders matter to a lot of people who don’t have us available near them,” Voge said.

Voge added that the brand’s top DTC customers — the first 500 people to buy from the secret menu — “make up a wide cross-section of America, they’re not all high income or coastal.”

Since launching in 2019, Voge said the brand has received daily messages and emails from people requesting novel flavors. “The true fans are asking for ridiculous ones, like funfetti cake sparkling water,” he said. “Others are looking for slight innovation, and our core SKUs are for them.”

The biggest confirmation, Voge said, is that the brand has a group of sparkling water aficionados who are drinking so much seltzer that they’re willing to try increasingly wilder flavors. On the other hand, one downside has been upset customers messaging the company about missing out on the quick sale due to things like travel, Voge said.

Nik Sharma, CEO of strategic initiatives firm Sharma Brands, said the secret menu is a clever extension of product drops, which have become commonplace among food and beverage brands.

“Buzzy drops are one of the biggest levers for brands that don’t want to spend a ton of money on customer acquisition,” Sharma said. “It’s a lot easier to make money off of your existing customers.”

For Aura Bora, secret menus are here to stay. “We anticipate doing it one more time this year, and probably two to three times annually – only because there are only so many weird flavor combinations we can make,” Voge said.