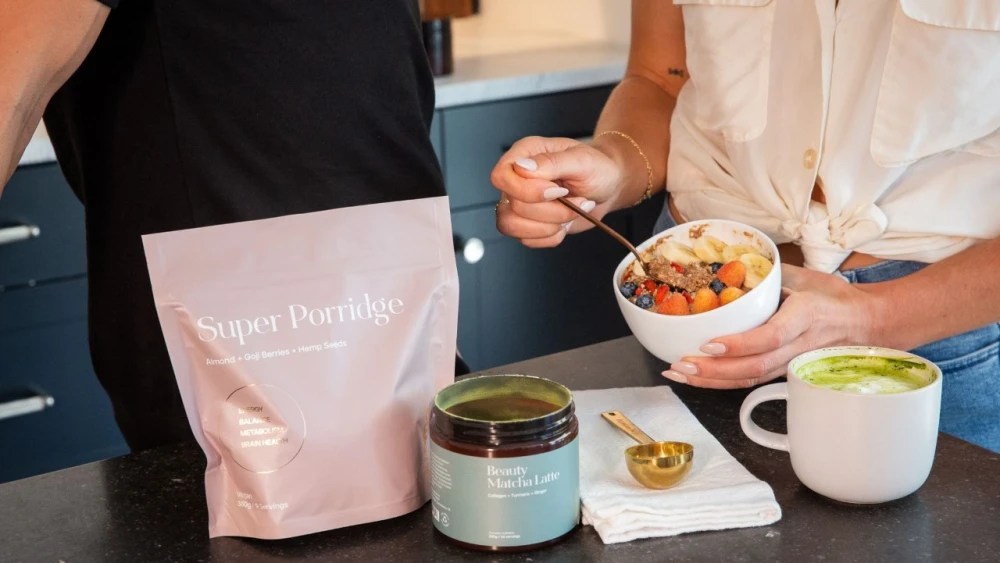 As more celebrities seek to get into entrepreneurship and investing, brands are increasingly working with famous faces in more creative ways than just sponsorship deals. Kroma Wellness, a superfood brand that launched in July 2021, is one such brand that’s utilizing its influential celebrity investors in its marketing strategy.

For founder and CEO Lisa Odenweller, getting into CPG comes after decades of experience in health-conscious food service. She previously owned Beaming, a 10-location Southern California chain of clean-eating-focused cafes. With Kroma, Odenweller said she wanted to reach more people via at-home products.

“The best way to do that is through non-perishable food that can be shipped,” she said. To launch the brand, Odenweller and her daughter created 19 ready-to-eat products, like broths, smoothies and supplements. The brand encourages people to try out these products through its 5-Day Reset, a program consisting of 10 nutrient-dense meals and snacks.

Last year, Kroma set out to acquire customers with a $100,000 annual paid marketing budget, hoping to attract digital shoppers through go-to DTC tactics like Instagram and Facebook ads. However, the brand wasn’t seeing notable ROAS, and so Odenweller started to prioritize her organic investor and celebrity relationships instead to grow awareness. Kroma’s investors include Gwyneth Paltrow, Amy Schumer and author Jessica Seinfeld, among others. As a result, Kroma Wellness generated $7 million in gross revenue over the first year of operation.

Odenweller told Modern Retail she credits the brand’s early organic following she gained through owning and operating Beaming Wellness. The reputation of her own recipes, featured on the Beaming menu, set a foundation for her current celebrity relationships. “That was my first entrance into the food and wellness world, and really helped lend us credibility in the industry,” she said.

“We’re not looking for a one-off post, we want to cultivate a relationship that’s mutually beneficial for the celebrity,” Odenweller said of these non-contracted partnerships. “We’ve never paid an investor to post about us — I look at it as a two-way street.”

The brand has 106 of what Odenweller calls “micro-investors,” which helped fund Kroma’s $5.5 million seed round. The funding round came about after Odenweller found it difficult to raise capital at the height of the pandemic. Instead, she began to use her own network to reach out to friends and colleagues to spread the word about Kroma’s flagship 5-Day Reset plan. “With so much noise out there, it’s important that our investors actually believed in the product and vision — meaning they’re organically sharing it with their followers,” she said.

One day, Odenweller said she woke up to an email from Gwyneth Paltrow “wanting to learn more about us,” with Paltrow having been a fan of Beaming over the years. From there, Odenweller continued to hear from other celebrities with interest in investing.

Odenweller said that as with any type of investor, it is important for brands to keep celebrity investors informed on what the brand is up to — whether it is new products, upcoming events or new sales channels. “At the same time, we’re always asking how Kroma can help cross-promote their ventures,” she said.

And while wellness-minded audiences are Kroma’s natural target, Odenweller said her wide set of investors is also helping the brand reach a wider array of audiences. “For instance, Amy Schumer’s audience is very diverse, and helps us reach customers beyond the Goop audience,” she said. Other Kroma network mainstays include entrepreneur Lauren Maillian and actress and model Molly Sims.

Despite the celeb-fueled marketing strategy, she said cultivating customer relationships is still Kroma’s biggest sales driver following the acquisition. “We’re building out a concierge program to make sure our customers are taken care of,” she said, along with a recently-launched rewards program.

But relying on celebrities to drive sales isn’t the be-all-end-all when it comes to sustainably growing a business.

In the end, the products have to speak for themselves to gain long-term traction. “I spent two years developing the products to make sure they had stickiness,” Odenweller she said. Two of the brand’s most popular SKUs are the powdered porridge and cookie butter, which have seen the biggest repurchase rate from the Reset program shoppers.

With so much noise in the celebrity brands space, it can be difficult for brands to leverage celebrities’ social media following in an authentic way. Not to mention, it poses a series of risks if the brand and the celebrity don’t properly disclose their relationship, said Katherine Black, partner in the consumer practice of Kearney. Black pointed to Kim Kardashian’s recent $1.26 million fine for not disclosing she was paid to promote Ethereum Max, as well as Kanye West’s fall from grace affecting brands like Gap and Adidas.

“I don’t want to overstep by asking for free promotions, but sometimes it takes going up to that person at an event to start these relationships off,” she said. And while not all brand founders have access to major Hollywood influencers, Odenweller said “everybody is connected to somebody of influence they can tap.”