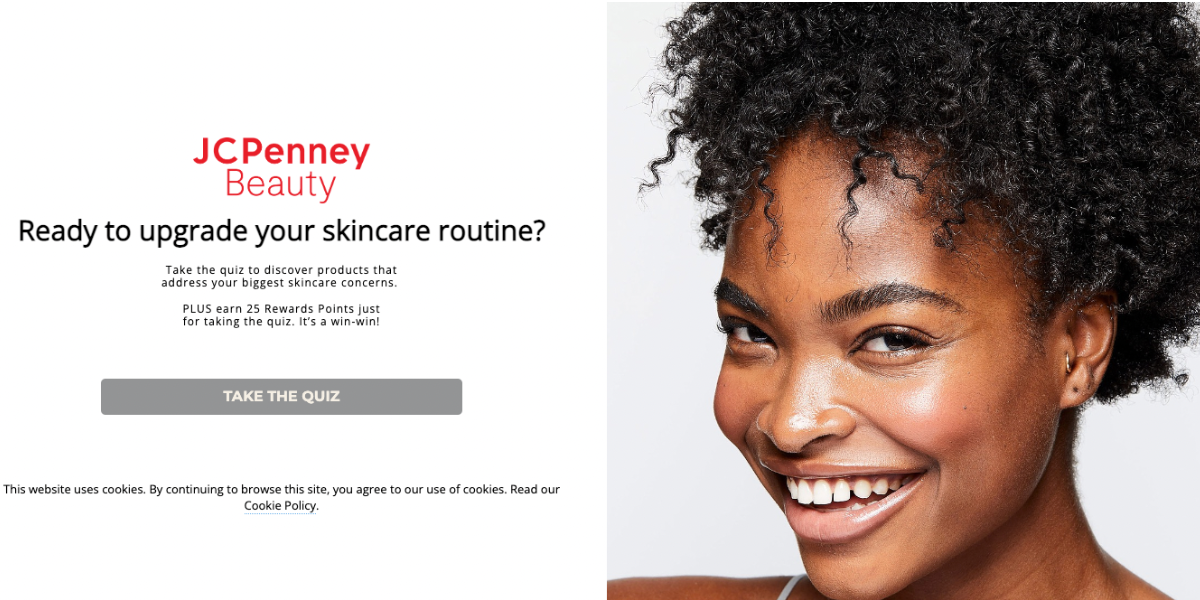 In an attempt to win more shopping trips, JCPenney is asking customers what they want via online quizzes.

The department store chain began rolling out quizzes to its shoppers in May, asking people about their lifestyle preference and their shopping habits, among others. In exchange for completing the quiz, people can gain rewards points, which they can apply towards purchases once they reach a certain amount. JCPenney has launched three quizzes so far, with three more planned this year.

After exiting Chapter 11 in December 2020 and completing its restructuring, the retailer is taking steps to drive additional visits from its loyal customer base using online quizzes. JCPenney said it is working with zero-party data company Jebbit to create these quizzes. By sending the quizzes to shoppers who’ve shared their email addresses with JCPenney, the company is able to tailor its marketing efforts around the customers that already love to shop with the brand.

“The purpose of this is to really get beyond what we can learn from customer transactional behavior and really take it a step further and learn directly from the customer,” said Debbie Stanford, senior marketing project manager for loyalty at JCPenney. “We’re not always going to be able to capture those types of attributes through a transaction.”

The department store expects its revenue to be $9 billion this fiscal year, up 10% from 2021. However, the retailer’s foot traffic has been down 28.8% in July and down 35% in June compared to 2019, according to foot traffic analytics company Placer.ai. JCPenney declined to share how many people it sends the online quizzes to but said the majority of those who shared emails with the company are rewards members. The company said it has over 24 million active rewards members.

Stanford said the company has both seasonal quizzes and “always on” quizzes that people can take at any time. So far, she said some of its quizzes have seen a completion rate of 80% and above.

The company said it is using the data from the quizzes to influence its messaging and content. For example, its seasonal back-to-school quiz, which aims to help parents find the style their kids want, has over 22,600 views. The company’s quiz, which was available from July through August, ask people a mix of fun questions as well as informational ones to gauge their price sensitivity.

“We definitely were able to influence messaging and content opportunities… to be able to speak more directly to the concerns [of shoppers],” Stanford said. “It will help as we make plans for next year for back-to-school time — the messaging, the assortment and the content.”

Calla Murphy, vp of digital strategy and integrated marketing at Belardi Wong, said that acquiring zero-party data, or data that consumers voluntarily hand over, has grown more important for retailers in recent years due to Apple’s anti-tracking updates and the upcoming phase-out of third-party cookies. Without some firsthand data on customers, it becomes more challenging to personalize their shopping experiences.

This phenomenon has prompted several retailers to launch these their own online quizzes to combat data depreciation. For example, DTC brand Doe Lashes has a lash quiz that allows the company to tailor the emails that they send and inform their merchandising decisions.

“[Online quizzes] allow your customers to really give you information about themselves or answer in an engaging way and engage with your brand,” Murphy said.

However, she said that capturing data is just the first step — applying the insights into the retailer’s strategy is one of the biggest challenges retailers have with online quizzes. Additionally, retailers have to make sure that the quizzes are engaging and don’t distract people from shopping.

“The quizzes that have a specific ask and then an action already tied to it usually are the ones we’ve seen being the most effective and the longest lasting for brands and retailers,” she said.

JCPenney’s Stanford said the company has a full-year map of quizzes planned and is also looking at ways to launch more evergreen quizzes. Additionally, she said these quizzes could potentially be used as an acquisition tool.

“A lot of people think about shopping or shopping at [JCPenney] at certain times of the year,” Stanford said. “It’s about keeping that engagement and awareness out there so that they could consider us for other times of the year as well.”