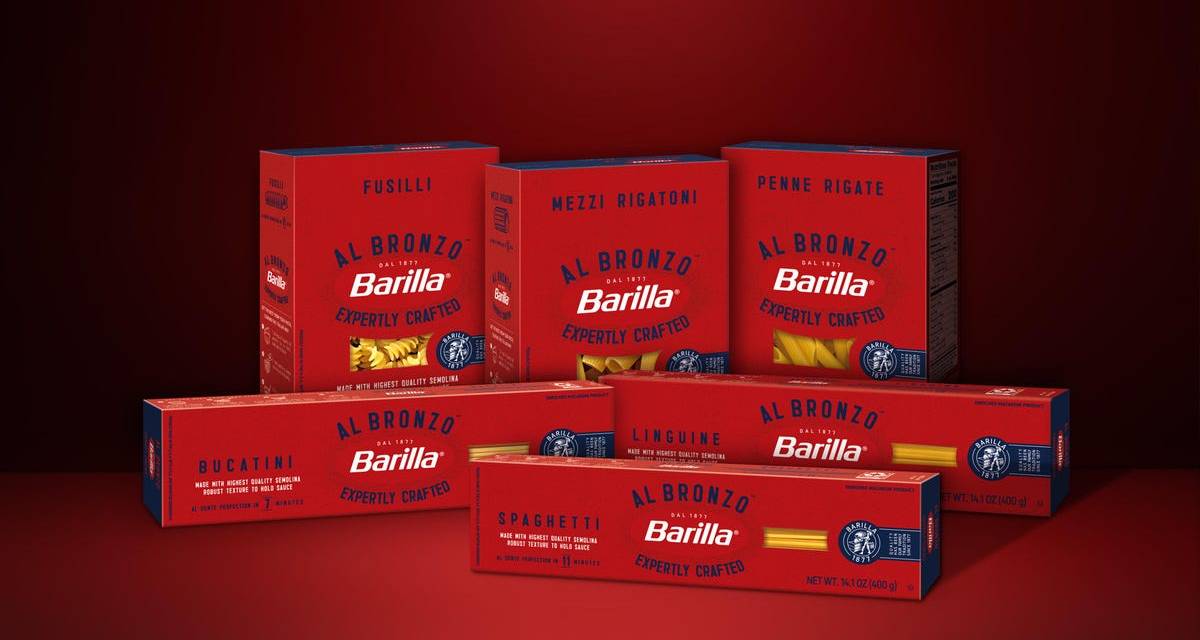 Barilla, the Italian pasta manufacturer that’s been around for 145 years, is trying to reach new shoppers with a more expensive line of pasta.

This fall, the company rolled out the new Al Bronzo line in partnership with Nordstrom, where the pasta was served at the retailer’s restaurants to celebrate National Pasta Month throughout October. Following the exclusive release, Barilla began selling the Al Bronzo products on Amazon in recent weeks, and is currently in the process of shipping it to retailers across the country. With a slew of new products made from alternative ingredients, Barilla is trying to go beyond its value-based grocery store roots by trying to reach health-conscious and higher-end shoppers. On top of the new product expansion, Ping said Barilla will also go through a “mini facelift,” including logo and packaging updates, that make the brand look and feel like a more modern CPG brand.

Al Bronzo shapes are created using  Barilla’s new micro-engraved bronze dyes, which the company says makes for a more robust texture and sauce grip than its classic semolina wheat recipe. The line is also sold in bright red boxes to easily differentiate it from Barilla’s flagship line. Al Bronzo shapes are currently offered in several best-selling shapes like bucatini, spaghetti and linguine. Furthermore, the Al Bronzo SKUs are sold at the suggested retail price of $2.99 per box, which is higher than Barilla’s blue boxes that sell for around $1.99. In addition to the Al Bronzo line, Barilla is also ramping up its high-protein and gluten-free pasta offering, to appeal to a greater variety of home cooks.

Jennifer Ping, marketing director at Barilla’s U.S. division, told Modern Retail that Al Bronzo arrives following the pandemic’s spike in home cooking, in which the company experienced historic retail sales. Barilla benefited from overall growth in the pasta and noodle market cap, which is expected to grow over the coming years, from $ 46.84 billion in 2022 to $77.83 billion by 2029. In turn, Barilla’s annual revenue hit 3.93 billion euros in 2021, slightly up from 2020’s  3.89 billion euros.

“We learned a lot about tastes during that time, and saw there is an opportunity for more elevated pasta experiences,” Ping said. Indeed, over the past four to five years, Barilla has found that more customers are seeking premium and better-for-you options in the pasta aisle. “So we launched Al Bronzo for occasions where people want to have something more special or premium to serve,” she added.

Barilla hasn’t disclosed Al Bronzo sales numbers yet, but Ping said feedback from retailers and the Nordstrom launch has been positive. At Nordstrom, chefs helped introduce Al Bronzo to diners with new, limited-time dishes, such as squash and pancetta Penne and a stir-fry style sweet and spicy steak dish. “But one surprising reaction we saw was that many retailers are taking all six SKUs for their shelves – when normally they take three or four of a new line,” Ping added.

Brand and communications strategy consultant Carly Sutherland said Barilla’s bet on premium “is an example of a legacy brand not only creating relevant products for modern tastes, but also modern realities like inflation and recession fears.”

As inflation shows few signs of abating, brands like Barilla are releasing new products “to make eating at home feel special or indulgent, more often, since consumers are tightening their wallets for outings,” Sutherland said.

Premium products, in general, have become a bigger area of focus for Barilla as it tries to keep up with changing tastes. The trend of high-protein and gluten-free pasta over the past few years was popularized by brands like Banza, and prompted Barilla to introduce its own chickpea- based variety in 2018.

While Barilla’s classic line continues to be its best-seller, the company is seeing better-for-you gradually gaining a bigger share of overall sales in the U.S.

“We see high-protein continue to rise, and so some of our lines like the one made with red lentils, have been a priority the past three to four years,” Ping said. Additionally, the chickpea pasta line, which launched in 2018, will be expanded in early 2023 with an upcoming orzo shape SKU. “Legume pasta is no longer a novelty, and we want to continue checking off dietary boxes with our newer products,” Ping said.

This also goes for Barilla’s lesser-known lines, such as Protein+, which launched back in 2019 and has seen a resurgence among shoppers and retailers in the past year. “I call Protein+ our sleeper hit, and it’s starting to move up the chart in terms of sales volume,” Ping said. Barilla’s yellow box Protein+ pastas aren’t gluten-free, Ping said, “but because they’re still made with semolina many customers are buying it because it tastes like our regular pasta.”

Much of the high-protein, low carb craze was born out of diet trends during the 2010s, Ping explained – when keto and paleo recipes dominated cooking habits. “We’ve now moved into a phase where people are eating carbs in moderation and using ingredients like legume pasta as a more nutritious option,” Ping said. “Thankfully, carbs aren’t seen as evil today.”

For Barilla, which was founded over a century ago, the goal is to keep enticing shoppers to reach for pasta more often.

“[Retailers] want more innovation in stores now that they have foot traffic back,” Ping said.

Since launching in 2017, nonalcoholic beer startup Athletic Brewing has become a CPG darling in retail circles. The Connecticut-based brewer’s sales reached $37 million in 2021, and grew 100% year-over-year in 2022. Now, Athletic Brewing is doing its biggest-ever marketing push tied to Dry January, as the nonalcoholic brewer hopes to become a household name.