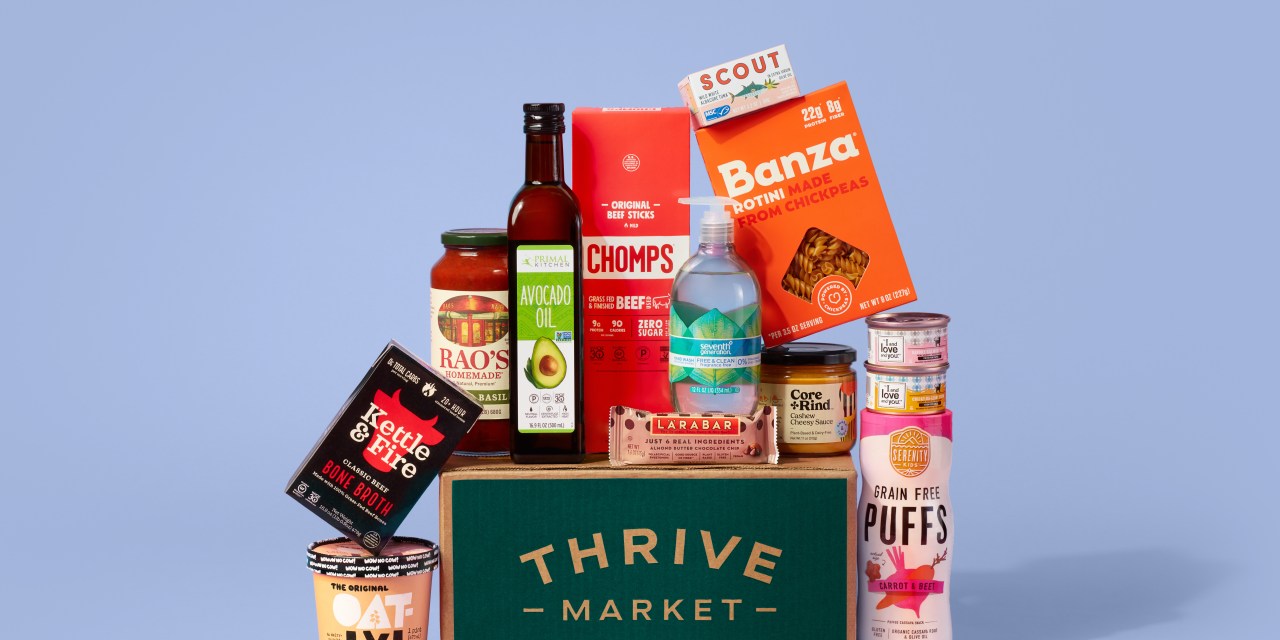 Starting Monday, a random 10% of its more than 1.2 million users will have access to the new Thrive Rewards program, which compiles several deals across the site into one location. Thrive Market is looking to extend the program to all members in the next week or so and add additional benefits in the near future.

U.S. retail sales have seesawed this year in the face of inflation. Sales were unexpectedly flat in September after climbing 0.4% in August and falling 0.4% in July, according to the U.S. Department of Commerce. 91% of U.S. CEOs surveyed by KPMG now foresee a recession in the next year, although one-third expect it to be “mild and short.” In this landscape, retailers are increasingly offering new or revamped rewards programs to retain customers who might be looking to cut down on spending. Thrive Market operates at a unique crossroads because it sells typically higher-margin items such as natural and organic foods. With “price and savings becoming even more of a barrier to healthy and sustainable living,” Thrive Market wants its customers to be able to access the most deals possible, CEO Nick Green told Modern Retail.

Thrive Market was founded in 2014 and has 900 employees across the U.S. It currently sells 5,500 consumer staples, including more than 700 Thrive Market owned-brand products. The company markets itself as “the health-first membership for conscious living” and sorts discounted goods by “aisle” (such as food, beauty and home), “diet” (such as Ketogenic, Paleo and vegan) and “brand” (such as KIND, Simple Mills and Seventh Generation).

Thrive Market offers a variety of deals to all its members, including lower-priced items, price matching, cash back and BOGO. Thrive Market’s most popular rewards include full-size gift with purchase and thematic sales around various trends and diets, such as vegetarian and organic, Green said. Thrive Market also promises members they will make back their annual membership fee in savings or receive a credit for the difference.

Before Thrive Rewards, these deals were listed in different places on the website. Green calls Thrive Rewards “the nirvana savings program, because it brings all the other savings programs together and enables members to find them, use them, track them, all in one place.”

Whereas some other retailers’ rewards programs operate on a tiered-model — think Sephora or Gap — Thrive Rewards offers deals to all customers, regardless of how many orders they’ve placed or how long they’ve been a member. “Our whole mission is around democratizing access,” Green said. “One thing we didn’t want to have was a tool or program that only applied to the top 5% or 10% of spenders on-site. That, to us, doesn’t achieve the goal of access.”

Besides deals, Green stressed the company also wants to “make shopping a little bit more fun.” In the future, it hopes to launch “Thrive Anywhere,” which enables members to receive savings with value-aligned partners such as fitness studios or meditation apps. Thrive Market also wants to incorporate gamification elements, like badges, into its rewards program next year.

More companies are choosing to consolidate discounts and promotions on their sites, John Mercer, head of global research at Coresight Research, told Modern Retail in an email. Amazon, for instance, has a personalized offers and coupons page. “In fact, that kind of one-stop page for deals is a key advantage for e-commerce players versus stores — where shoppers would have to trek around a store looking out for deals,” Mercer said.

Loyalty program management can be huge for a company. It accounted for 8.4% of B-to-C marketing budgets on average in 2021, according to Gartner’s CMO Spend Survey that year. And since “subscription tends to be really high churn,” the best programs build loyalty into every part of the customer experience, Brad Jashinsky, director analyst at Gartner, told Modern Retail.

That loyalty is especially important for subscription services that sell higher-priced categories of goods and could be concerned a recession could drive customers away. These companies should give their users an “immediate benefit” so they “can see that return,” Jashinsky said. In a similar vein to grocery receipts, showing the customers’ cumulative savings may help justify the cost of a monthly fee, he said.

According to a recent Coresight Research survey, free shipping (73%), discounts (70.8%) and the ability to earn redeemable vouchers or points (46.2%) are the top three perks U.S. consumers desire the most in a loyalty program.

But this could change. Subscription services “have to keep serving the customers and understanding what the customers are looking for,” Mary Pilecki, a Forrester analyst covering loyalty marketing, told Modern Retail. “Right now, consumers may be looking for more discounts because of inflation,” she said. “But there’s value in having Thrive curate healthy products that meet that specific customer’s needs. Every loyalty program is about the value proposition and making sure it’s an equal value that the brand’s getting and the consumer.”

Thrive Market is already focused on this goal, Green said. “We don’t want to create programs that are just doing discounting for discounting’s sake,” he said. “Yes, we want to make the price as affordable to our members as possible. But we always try to also be doing something that adds value beyond just the discount itself.”